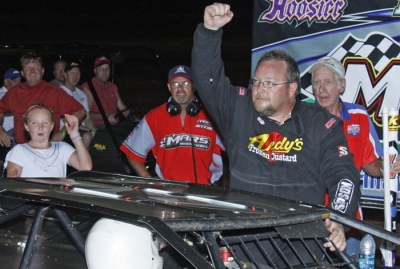 "John was not only a great sponsor, but also a very good friend of ours,” Phillips said after the victory at the quarter-mile oval. “This little joint is a racy place and they always prepare a great track for us.”

Jeremy Payne, two-time winner of the Kuntz Memorial, ended up second behind his teammate while Kelly Boen of Henderson, Colo., was third in the Oklahoma-based Pannell Motorsports No. 33x. Ninth-starting Justin Wells of Aurora, Mo., was fourth and Al Purkey of Coffeyville, Kan., drove a new Larry Shaw Race Car to a fifth-place finish.

Evan Hubert of Cross Timbers, Mo., started outside the front row and held the second spot early, but a flat tire brought out the race’s only caution and knocked him out of contention in the 40-lapper.