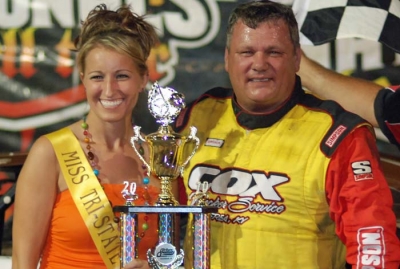 HAUBSTADT, Ind. (June 27) — Polesitter Don O’Neal chased race-long leader Jason Feger in the wall-scraping high groove at Tri-State Speedway through most of the 40-lap feature for the 12th leg of the UMP DIRTcar Summernationals, but O’Neal eventually decided the middle lane of the quarter-mile oval provided a more prudent path. Turns out it was a faster groove, too.

“When I dropped down off the top a couple of car widths, I picked up better,” said the 46-year-old driver from Martinsville, Ind., who tracked down Feger in the final 10 laps. “There was a little more racetrack right in there than I thought there was, or I’d have done it earlier.”

O’Neal’s timing was good enough for his second victory in three series starts in 2010 as he worked under Feger with four laps remaining for a $5,000 payday.

“These deals are pretty tough to win,” said O’Neal, whose 37th career Summernationals victory came in his part-time ride for Illinois-based car owner Larry Moring and crew chief Ronnie Stuckey. “It feels awesome, pretty awesome. We’ve got pretty good guys working on the hot rod, and that makes a difference.”

A disappointed Feger — who said his door bump of O’Neal during a caution period just after the pass for the lead was accidental, not retaliation — settled for a second-place finish after surviving hard contact with the turn-one wall on lap 37.

“It’s just frustrating to lead 36 or 37 out of 40 and give it up,” said the 32-year-old Bloomington, Ill., driver, who posted his third runner-up finish on the series. "My right-rear tire was going away a little bit, and just the pace I was running. I started getting frustrated with the lapped traffic — that was pretty obvious — and he just slowed down and rolled through the middle there and got me right at the end.”

Dennis Erb Jr. of Carpentersville, Ill., was third followed by series points leader Shannon Babb of Moweaqua, Ill., who regained five positions lost on a lap-eight infield spin. Jeep Van Wormer of Pinconning, Mich., last year’s series winner at Tri-State, rallied from 10th to round out the top five on a hurry-up night when the track beat an approaching rainstorm.

Feger started outside the front row and jumped to the high side while O’Neal and Babb experimented with the low groove early in the race. After a lap-six caution that eliminated Steve Casebolt — he was the innocent victim of a Van Wormer-Joe Morris tangle exiting turn four that sent Morris spinning on the frontstretch — the pursuit up front continued.

When O’Neal and Babb both dove low in turn four on the eighth lap, Babb got sideways and spun into the infield, swirling back onto the track with a 360-degree spin and dropping back to eighth.

“We both went to the bottom and I just got in there too tight and got up on that (buried infield tire) and it pulled me on around,” Babb said.

That set up a two-car battle the rest of the way as Feger led O’Neal through the middle stages of the race, building a half-straightaway lead and extending it on lap 26 when he was able to maneuver past a trio of lapped cars that ran three-wide in front of O’Neal.

“I thought I was going to lose second there for a while,” O’Neal said. “I sort of hit one of them, but I had to do something, because they were holding me up bad.”

But once O’Neal cleared the traffic, he started picking up time in his middle groove while Feger wasn’t finding the traction in the outside groove he had earlier.

“Once I started showing my nose a little bit, then he got to running harder ... I thought we were in pretty good shape,” O’Neal said.

“I haven’t had much luck on this deal and I was pretty frustrated,” Feger said. “I definitely wanted to get the win and I was definitely pushing it hard. Maybe I need to just back it down a little bit next time.”

Three cautions slowed the action, first for the frontstretch incident on lap six and again on the lap-six restart when Van Wormer got sideways heading for the green and drivers scrambled behind him; Billy Moyer Jr. retired with a broken left-rear suspension.

The final yellow appeared on lap 37 for Ran Unzicker of El Paso, Ill., who was in contention for his third straight top-three finish. He slowed with a flat tire late in the race while battling Erb; he pitted for new rubber and finished 10th.

Babb leads the series with 779 points, 10 more than Erb’s 769. Jack Sullivan of Greenbrier, Ark., who finished sixth in his Tri-State debut, is third at 728.

Notes: The winning MasterSbilt Race Car is sponsored by Freeport Recycling Center and MDI Environmental Systems. ... O’Neal has two victories in four starts for Forreston, Ill.-based Moring Motorsports. ... He plans to run Monday’s series event at Lincoln Park Speedway in Putnamville, Ind. ... Jack Sullivan’s team had to make significant repairs to the right-front suspension of his No. 1 following Saturday’s victory at Clarksville, Tenn. Sullivan caught the wall on the first lap while running side-by-side with polesitter Rodney Melvin. The team replaced a bent upper A-Frame. “It’s a wonder we finished,” said crew chief Chad Curran. ... Brian Shirley had carburetor problems qualifying in Tim Lance’s backup car, but made fixes to improve from 16th to seventh in the main event.

Editor's note: Video coverage from Tri-State will include bonus coverage and a full recap of the feature event.

Polesitter Brian Shirley drove Tim Lance's backup car to a 12-lap victory in a race with tight battles for the transfer spots. Shirley got ahead of the fray by the halfway point while Jeff Walston wrapped up the second spot when Chad Zobrist nearly spun in turn four on the seventh lap. Brandon Sheppard, who made an infield foray in turn four early in the race and lost two positions, rallied for the third and final transfer spot, just behind Walston. Zobrist ended up fourth. Jason McBride and Rusty Schlenk finished back in the pack but are in line for provisional starting spots. Shirley will start alongside the lookalike car of Lance on the eighth row of the main event.

Jason Feger swept into the lead from outside the front row and cruised to an easy victory. Polesitter Ryan Unzicker had his hands full with Dillan White early in the race but eased away to get second while the fifth-starting White was a solid third. Steve Casebolt was further back in fourth and Tim Lance's smoking car got the fifth and final transfer spot over Brandon Sheppard, who has three straight top-10 Summernationals finishes.

Making his first career appearance at Tri-State, Jack Sullivan led all the way from outside the front row, fending off race-long challenges from Dennis Erb Jr., and late in the race from Billy Moyer Jr. Sullivan rode the high side to victory with Erb and a lower-running Moyer just behind at the finish. Joe Morris was fourth and eighth-starting Richie Hedrick got the final transfer spot. Polesitter Nick Lyons pushed high in turn three on the first lap, faded from contention and pulled to the infield on the fourth lap.

Outside front-row starter Don O'Neal went around polesitter Shannon Babb on the backstretch to take the lead on the second lap, then led the rest of the way. Babb finished a few lengths back in second while second-row starters Rodney Melvin and Jeep Van Wormer stayed hot on the heels of the frontrunners. Eighth-starting Brian Shirley held the fifth and final transfer spot, but Donny Walden snuck by on the last-lap restart. Jim Moon spun between turns three and four on the final lap to draw a caution. Chad Zobrist got into the turn-four wall earlier in the race, but he was able to keep rolling.

Shannon Babb of Moweaqua, Ill., a two-time series winner at Tri-State Speedway, topped 28 qualifiers at the quarter-mile oval on Sunday for the 12th leg of the 29-race UMP DIRTcar Summernationals. Babb posted a lap of 13.542 seconds at the track in southwestern Indiana to earn the pole for the first heat race.

The top five finishers from each of three heats will transfer to the main event, with three drivers from the consolation race also transferring. Three provisionals will round out the 21-car field.

With Wendell Wallace’s departure from the series (he plans to rejoin the tour Thursday in Atwood, Tenn.), 11 drivers have competed in the first 11 events. ... Two drivers who missed their first series races Saturday in Clarksville, Tenn., have rejoined the series: Donny Walden of Towanda, Ill., and Jim Moon of Zionsville, Ind. ... Brian Shirley of Chatham, Ill., is piloting Tim Lance’s backup car (he also drove the car at Shepp’s Speedway on Thursday). ... Lance is among drivers rejoining the series along Kevin Cole, Rusty Schlenk and Nick Lyons. ... Schlenk rejoins the series fresh off a $4,600 victory in Oakshade (Ohio) Raceway's Barney Oldfield Memorial on Saturday; the Summernationals wrap up at Oakshade on July 17. ... The most notable of newcomers is Steve Casebolt of Richmond, Ind., a Lucas Oil Late Model Dirt Series regular who typically hits a few Summernationals races each season. Casebolt also plans on entering Monday's race in Putnamville, Ind., which is just 15 miles from the headquarters of his major sponsor, Dixie Chopper. ... The modified division is the only other division in action.