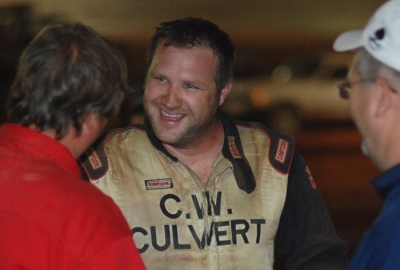 CLARKSVILLE, Tenn. (June 26) — In his only other visit to Clarksville Speedway in 2007, Jack Sullivan set fast time but settled for fourth place in the main event. After Sullivan set fast time Saturday for the 11th leg of the 29-race UMP DIRTcar Summernationals, car owner Joe Garrison asked the 34-year-old driver from Greenbrier, Ark., for a better outcome in his second race at the quarter-mile oval. | Complete Summernationals coverage

Sullivan didn’t disappoint, surviving a poor start and rallying past Jeep Van Wormer after a mid-race restart for his first career Summernationals victory and a $10,000 payday, the richest purse of his Late Model career.

Sullivan, who started outside the front row but slipped back to fourth after a poor start, and the higher-running Van Wormer battled side by side for five laps before Sullivan slipped underneath exiting turn two on the 25th lap for a lead he’d never give up.

“I could kind of get under Jeep there, and hopefully I was just kind of waiting for him to maybe mess up or whatever,” Sullivan said. "He kind of got into (turn) one there a little hot there, and that kind of opened the door for me.”

Van Wormer, of Pinconning, Mich., hung with Sullivan the rest of the way but could never mount a serious challenge, falling a few lengths short of Sullivan’s GRT Race Cars house car at the checkers. Sixth-starting Ryan Unzicker of El Paso, Ill., was third followed by polesitter Rodney Melvin of Benton, Ill., who led the first four laps but faded to finish fourth, just ahead of seventh-starting Dennis Erb Jr.

Melvin took command early in the low groove, but action was halted on the second lap for debris from Dustin Butler’s car in turn two, and Van Wormer plotted his move in restarting behind Melvin, Jeff Walston of Paducah, Ky., and Sullivan.

“I noticed right off the get-go everybody was going to try and crowd that bottom,” Van Wormer said, "so I waited until we had that restart, and I thought, ‘Well, you know, if everybody goes to the bottom, I might as well go up there and see if it’s any good.’ I got up there and it was really good.”

So good that Van Wormer swept into the lead on the fifth lap and had a half-straightaway margin after 10 laps as he cruised out front while Sullivan fought his way past Melvin and Watson by lap 12.

But a mid-race caution in the 40-lapper for Jason McBride’s turn-two spin changed the complexion of the race, allowing Sullivan to pressure Van Wormer in the middle groove. Van Wormer said crew members encouraged him to run a little lower in turns three and four, but it didn’t pay off.

"I tried that, and the car was just a little bit too tight when we first started and the right-front (tire) must’ve cooled down a bit, and it started shoving, and I think that’s when Jack got up next to me and made up some ground there,” said a disappointed Van Wormer, who won the ’07 Summernationals race at Clarksville. "I should’ve just gone right back to the top where I had been running and built the lead that I had, and just been done with it.”

But it was too late when Sullivan continued working Van Wormer, battling side by side for five laps before making the winning pass and putting his No. 1 back in front of the No. 55.

I knew when we started, I knew it was kind of going to be a momentum-type deal,” Sullivan said. "I kinda went down there to check the bottom (early in the race), and Jeep kind of snookered me there. After I got going there and got my tires under me, I just tried not to slip my car and keep my momentum there, we were good enough to move on by there.”

Van Wormer struggled to focus on regaining the lead in the late stages.

"I don’t know if I was trying too hard to get back to him,” Van Wormer said. "I was pretty pissed off at that point that I gave up the lead, so I probably made some mental mistakes and stuff like that.”

Sullivan himself had to gather himself after he said he was squeezed into the frontstretch wall at the outset of the race.

“I kind of lost my cool there. I was pretty mad,” Sullivan said. "Luckily we had a caution there a few laps after that, and I kind of got calmed down and realized I could probably win the race if I’d just slow down and just try to keep it cool.”

Series points leader Shannon Babb dug a hole early in the night when he missed his qualifying spot and had to start on the tail of a heat race. He took a provisional for the main event and gained nine positions to finish 10th, allowing Erb to cut 13 points off his lead.

Notes: Sullivan’s GRT Race Car has a Vic Hill Racing Engine and sponsorship from Triple A Diesel and Allstar Performance. ... Sullivan's previous richest Late Model victory was $7,500 in January 2006 at Central Arizona Raceway in Casa Grande, Ariz. ... He's won as much as $20,000 in his successful modified career. ... Sullivan, who entered the race fourth in Summernationals points, posted his best run on the series since he was third in the Brownstown (Ind.) Speedway opener. ... Jeep Van Wormer got his third top-three finish in four races. ... Ryan Unzicker has been third or better in two consecutive events. ... Clarksville’s weekly points leader Jeff Walston started third but faded throughout the race before dropping out.

At 10:30 p.m., feature cars are pulling out on the racetrack and will tour the grandstands with helmets to collect money for Special Olympics; the 40-lapper should start by 10:45 p.m. or so. ... Shannon Babb gets the series provisional, Tony Albright gets the provisional based on '09 UMP points and Dustin Butler got the track provisional. ... GRT Race Cars co-founder Joe Garrison joined his house car team of Jack Sullivan, who has been running the tour along with fellow GRT driver Wendell Wallace. "You see what happens when I get here," Garrison said, gesturing toward the two cars in the pits. "We've got 'em both starting up front." Sullivan was fortunate to win his heat while battling a loose-handling car, but Garrison said he was trying to protect his position against Ryan Unzicker. "He was running a little too conservative," Garrison said. Wallace plans on dropping off the tour until Thursday's event at Clayhill Motorsports Park in Atwood, Tenn. ... Illinois driver Richie Hedrick thought his Summernationals tour might end at 11 races after a poor qualifying effort at Clarksville. But he rallied from eighth to fourth in his heat race to transfer to the main event, and vows to stick with it. Time trials are critical on the tour, and Hedrick says he struggles against the clock. "Ever since I started racing I'm just not good at qualifying," Hedrick said. "That's what makes it so hard for me on this series." ... Jim Moon dropped off the tour with plans to run at Macon tonight, UMP official Scott Davies said.

Polesitter Levi Ashby led all the way in the B-Main to transfer to the main event along with runner-up Chris Shelton. The C-Main was cancelled and the four drivers from that lineup were added to the tail of the B-Main.

Rodney Melvin drew the pole in the heat winners. Jack Sullivan will start outside the front row while Jeff Walston and Jeep Van Wormer will start on the second row for the 40-lap main event.

Polesitter Jeep Van Wormer rolled to victory over fellow front-row starter Billy Moyer Jr. in a race with single-file racing among the frontrunners. Fourth-starting Jason McBride held third the whole way while fifth-starting Brian Shirley got the fourth and final transfer spot. Clayton Millerwas fifth ahead of Shannon Babb, who would've been the fast qualifier in the group but lost his time for being out of order in time trials.

Polesitter Jeff Walston jumped out early and cruised to an easy victory while the battle behind him was a tight one among five drivers battling for the other three transfer spots. Third-starting Dennis Erb Jr. finally broke away from the pack to get second while sixth-starting Don O'Neal was third after tight racing with outside front-row starter Carnell Parker III, Brett Wyatt and eighth-starting Richie Hedrick. Hedrick eventually worked his way into the fourth and final transfer spot. John Minon Jr. banged into the turn-four wall on the first lap, drawing a yellow; third-starting Dennis Erb Jr. got out of shape exiting turn two on the next start, causing another complete restart.

Polesitter and overall fast qualifier Jack Sullivan rode the low groove to victory, fighting off several inside challenges from Ryan Unzicker for the victory. The frontrunners nearly lost control during one challenge in turn one, but Sullivan stayed in control while Unzicker settled for second. Outside front-row starter Wendell Wallace stayed just behind the top two and finished third while Tanner English finished a bit further back in fourth. Dustin Butler brought out a caution on the first start when he rolled into the infield in turn one.

Polesitter Rodney Melvin outdueled fellow front-row starter Terry English on the first lap and led the two-car breakaway the full 10-lap distance. Last-row starters Brandon Sheppard and Jason Feger worked through the field to finish third and fourth, transferring to the main event in the caution-free prelim. Levi Ashby was a distant fifth.

Jack Sullivan of Greenbrier, Ark., topped 39 qualifiers Saturday at Clarksville Speedway in time trials for the 11th leg of the UMP DIRTcar Summernationals. Sullivan posted a lap of 13.251 seconds at the quarter-mile oval and will start on the pole of the second heat race. Other heat race polesitters following group qualifying: Rodney Melvin of Benton, Ill.; Jeff Walston of Paducah, Ky.; and series points leader Shannon Babb of Moweaqua, Ill.

Four heat races will send four drivers apiece to the main event. The top finishers from a C-Main transfer to a B-main, which transfers two cars to the feature. Three provisionals fill out the 21-car field for the $10,000-to-win event.

Jason Feger’s qualifying lap was slowed when he got into the outside wall between turns three and four. ... Bryan Singleton got into the turn-one wall and didn’t get a time. ... Shannon Babb enters the race leading the series points over three-time champ Dennis Erb Jr. of Carpentersville, Ill. ... Babb and Don O’Neal of Martinsville, Ind., are tied with two series victories apiece at Clarksville. Terry English of Benton, Ky., is entered in the Burr Motorsports No. 33, a car formerly owned by English. ... His son Tanner, who ran the first two series events, is back on the series. ... Another young Kentuckian, Dillan White of Crofton, Ky., is back on the tour; his last appearance was in Danville, Ill., when he scratched from the feature with engine problems after finishing second in a heat race. ... Donny Walden of Towanda, Ill., ran the first 10 events but isn’t entered; 11 drivers have entered every race. ... Six other divisions are also in action, including UMP-sanctioned Crate Late Models. ... A few of the Crate drivers are also competing in the Summernationals event. ... Every division is taking time trials except pure mini and mini mod.