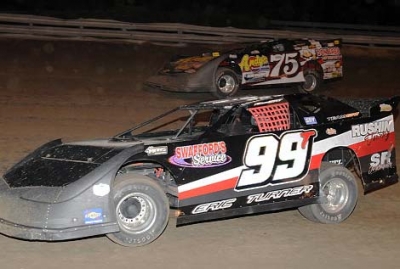 SEDALIA, Mo. (June 25) — Terry Phillips won a lead-swapping duel with fellow Springfield, Mo., driver Eric Turner at State Fair Speedway for a $3,000 victory in a co-sanctioned event. Phillips notched his 97th career victory on the Lucas Oil Midwest LateModel Racing Association and his 70th on the MARS DIRTcar Series as the Missouri-based tours faced off on the half-mile oval. | Slideshow

David Turner of Creighton, Mo., and Dave Eckrich of Cosgrove, Iowa, led the field to the green with Eckrich getting the early jump while Phillips was quickly up to third.

After a pair of cautions on lap 23 — first for a slowing Denny Eckrich, then when J.D. Hubert got into the frontstretch guardrail on the restart — Phillips took command and raced away to victory.

Notes: Phillip’s Don Babb Motorsports GRT Race Car is powered by a Hatfield Racing Engine with sponsorship from Andy's Frozen Custard, New Vision Graphics and Port City Racing. ... Al Purkey was forced into a consolation race after a flat tire in his heat race. ... Among drivers failing to make the feature: Justin Asplin, Randy McGraw, Larry Clawson and Dustin Mooneyham. ... The MARS-MLRA weekend heads to Springfield (Mo.) Raceway on Saturday, the first-ever MLRA visit to the track. The John Kuntz Memorial pays $3,000 to the winner.