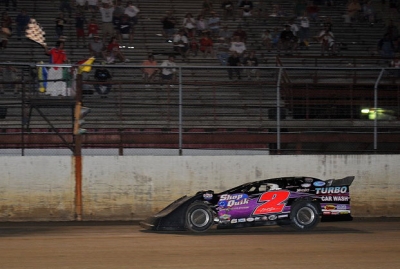 Anderson checked out from the beginning of the 30-lapper, building a lead on Al Purkey of Coffeyville, Kan., in the early laps before Chris Spieker slowed on lap 15 to draw the first of two cautions.

Anderson resumed his domination on the restart and was firmly in control when Purkey slowed on the frontstretch running second with just two laps remaining, setting up a green-white-checkered finish at Moberly.

Eckrich was up to second for the restart and made an aggressive move on the bottom side of the track. But Anderson screamed to the checkered flag to complete his 21st career MLRA victory.

Eckrich settled for second while Denny Woodworth of Mendon, Ill., was third. Home-state drivers Terry Phillips of Springfield and Brad Looney of Republic, the series points leader, rounded out the top five finishers. Purkey was 14th in the 20-car field.