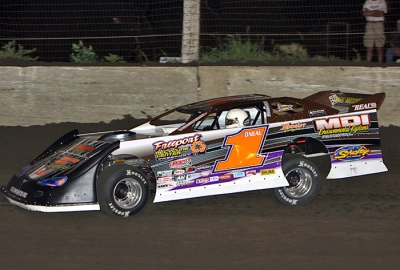 The 2004 Summernationals champion set fast time, cruised in his heat race and led all 40 laps of the main event for a $10,000 payday in his first series event of 2010. The 46-year-old O’Neal built leads of more than a straightaway and was never challenged in capturing his 36th career series victory.

“I knew when we hot-lapped we had a good race car, and if we just didn’t mess it up, we’d be good,” O’Neal said. "(Crew chief Ronnie) Stuckey made all the changes he wanted to make to it, and evidently they were the right ones. It was an awesome car all night.”

O’Neal’s regular ride is the yellow No. 71 — a MasterSbilt Race Cars house car — but he’s making some part-time starts in a MasterSbilt for Forreston, Ill.-based Larry Moring, a long-time Dirt Late Model team owner who has fielded successful cars for Gary Webb, Steve Francis, Matt Miller and others.

“To come in here and run the first one we’ve run all year and win, that makes you really proud,” O’Neal said. "We’re going to run at least three more. (Moring) said as long as I kept winning we could keep racing, so I don’t know — maybe we can run all next week.”

Outside front-row starter Ryan Unzicker of El Paso, Ill., couldn’t keep up with O’Neal but fought off several challenges from Eric Smith of Bloomington, Ill., and later Dennis Erb Jr. of Carpentersville, Ill., to hang on for his best series finish of 2010. Erb, who restarted seventh after a lap-23 caution, rallied to third in the low groove and finished just behind Unzicker, while Smith ended up fourth. Brandon Sheppard of New Berlin, Ill., was fifth for his best series run.

Erb’s third-place finish cuts into the series points lead of Shannon Babb of Moweaqua, Ill., who finished 11th and was never a factor after starting inside the seventh row.

O’Neal had nearly a full straightaway lead after five laps, and stayed at least that far ahead until the lap-23 spin of Brian Harris in turn four that reset the field with O’Neal ahead of Unzicker, Smith, Scott Bull and Sheppard. The winner again pulled away to a full straightaway edge after just a few laps, a margin cut in half late in the race as he made sure he didn’t make any mistakes in maneuvering in Farmer City’s high groove.

“The one end got a little slicker than we really thought, but the other end stayed all night. I figured if we stayed out of trouble, we were going to be OK,” O’Neal said. “I kept bottoming out real bad getting into (turn) three. I could see Ronnie and I knew I had a good enough lead where I could not run in there real hard and tear the cross member out of it.”

Unzicker edged closer to O’Neal late in the race but knew that catching him was going to be difficult.

“He was pretty much gone. It kind of seemed like later in the race I got a little bit better and he faded off a little bit. I don’t know, he’s a heckuva wheelman and it’s a pleasure to finish second to him,” said Unzicker, who entered the event seventh in series points. “After he won his heat race and checked out, I knew I was going to have my hands full with him. But this is our best finish for the series ... We’ve been working hard. We had a run of bad luck the last two or three nights.”

Notes: The winning MasterSbilt Race Car is sponsored by Freeport Recycling Center and MDI Environmental Systems. ... O’Neal’s previous series victories at Farmer City came in 2001, ’03 and ’05. ... O'Neal's previous start in Moring's car came at West Liberty (Iowa) Raceway on May 1, finishing sixth. ... Runner-up Ryan Unzicker’s best previous finish was third at Cedar Lake Speedway and Vermilion County Speedway. ... Frank Heckenast Jr. or Orland Park, Ill., was running seventh when he got sideways between turns one and two and briefly toured the infield, rejoining the race on the backstretch; he lost several positions but got back to seventh at the finish. ... Provisional starter Jack Sullivan of Greenbrier, Ark., started 19th and finished eighth. ... Bobby Pierce won the night's Crate Late Model feature. ... The series heads to Clarksville (Tenn.) Speedway on Saturday for a $10,000-to-win event.

Third-starting Wendell Wallace overtook polesitter Donny Walden on the fourth lap and held off Jason Jameson the rest of the way for a victory. Wallace, who ran an unusual line through the inside of turn three and off the high side in turn four (to avoid a hole outside turn three), transfers to the main event along with Jameson, who started sixth. Outside front-row starter Richie Hedrick was running third on the final lap when he slipped over the turn-one banking, and Walden retired to the infield on a lap-nine restart after Jay Morris got into the wall between turns three and four. Fifth-finishing Jack Sullivan transfers to the feature with a series provisional, while Joe Harlan gets a provisional based on UMP's '09 weekly points. Daren Friedman, who ran a C-Main, gets the track provisional and starts on the tail of the 21-car field.

Feature polesitter Don O'Neal huddled with crew chief Ronnie Stuckey and the Moring Motorsports crew, talking about tire choice that would provide the right stagger. "We've done everything right so far, so we better not screw it up," joked O'Neal, who also set fast time and won his heat race. One crew member jokingly suggested adding fuel and sending the car on the track untouched. Stuckey shook his head. "I know that don't work in this business." ... Jim Moon of Zionsville, Ind., has attended every series event, but he never transferred to a feature until Farmer City, when he ran fourth in his heat race just behind Brian Shirley. Moon said a gentleman helped worked on the GM CT525 all-aluminum powerplant last night at Shepp's Speedway, adding a second fuel regulator that has improved the engine's performance. He's glad to finally break through to make a main event. "Another lap and I would've got Shirley," said Moon, who rallied from ninth to fourth in his heat race. ... Mark Voigt attended the first nine series events but skipped Farmer City. ... With the track not running weekly recently, drivers say they're seeing a little different surface. B-Main polesitter Donny Walden wondered if some of the banking hadn't been cut out of the corners. ... Jack Sullivan is in line for a series provisional, but he plans on trying out a different setup in the B-Main. "We're going to use it as a test session," he said.

Cory Daugherty and Jason McBride won C-Mains and are among drivers joining the rear of the B-Main. Here's the B-Main lineup, which senes two drivers to the main event:

In the draw among heat winners Don O'Neal drew the pole with Ryan Unzicker alongside. Brandon Sheppard and Eric Smith make up the second for the 40-lap feature, which comes up following consolation races.

Avoiding penalty despite twice jumping the start, polesitter and overall fast qualifier Don O'Neal jumped out to a straightaway lead after three laps and cruised to victory. Eighth-starting Dennis Erb Jr. made a strong charge, reaching the second spot by the midway point and keeping pace with O'Neal the rest of the way. Outside front-row starter Rodney Melvin held off sixth-starting Jeep Van Wormer in the closing laps while Jay Morris was battling Melvin for third when he slipped back to fifth exiting turn two on the sixth lap.

Polesitter Brandon Sheppard cruised to a 10-lap victory with fellow front-row starter Chris Simpson more than a straightaway behind in second. Brian Shirley got the third spot while ninth-starting Jim Moon and his CT525 crate engine was fourth, giving Moon his first feature start on the series. Sixth-starting Wendell Wallace challenged for third midway through the race before fading, while Moon pressured Shirley in the closing laps.

Outside front-row starter Eric Smith edged away from polesitter Scott Bull for a 10-lap victory, taking the checkers a straightaway ahead. Bull was second with second-row starter Brian Harris and Ryan Dauber getting the other two transfer spots in a caution-free prelim.

Polesitter Ryan Unzicker built a straightaway lead before the halfway point of the 10-lapper and cruised to an easy victory. Outside front-row starter Frank Heckenast Jr. kept Shannon Babb at bay throughout the race, and Babb fell to the fourth spot at the white flag when Jason Feger made a high-side pass. Babb, the series points leader, got the fourth and final transfer spot. Donny Walden was a distant fifth.

Don O’Neal of Martinsville, Ind., was the overall fastest of 45 qualifiers Friday at Farmer City Raceway for the 10th leg of the UMP DIRTcar Summernationals. O’Neal posted a lap of 12.786 seconds on the quarter-mile oval to earn the pole position for the fourth heat.

Derek Chandler peeled a left-rear tire off the rim and spun on the frontstretch before taking the green for his qualifying lap. ... Brian Shirley is back in his own No. 3s Pierce Race Car at Farmer City after piloting Tim Lance's backup No. 48 Rayburn Race Car on Thursday at Shepp's Speedway. ... Initially the track's caution lights weren't working, and officials notified drivers of plans to use flaggers in each corner; but the lights were repaired just before hot laps. ... Don O'Neal, the 2004 Summernationals champion and third all-time winningest series drivers with 35 victories, is entering his first series race of 2010. O'Neal is driving the Moring Motorsports car he fielded earlier this season at West Liberty (Iowa) Raceway. He’s a three-time Summernationals winner at Farmer City. ... Among other drivers making their first series appearances of 2010: Cory Daugherty of Blue Mound, Ill.; Joe Harlan of El Paso, Ill.; and Rich Bell of Sheffield, Ill. ... Long-time Summernationals driver Kevin Weaver of Gibson City, Ill., underwent heart surgery Thursday to unblock an artery; chaplain Tim Bozarth added him to the prayer list during the night's invocation while he recovers.