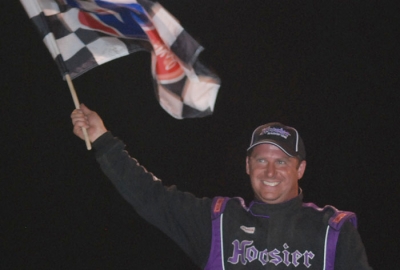 ALEXANDER, Ill. (June 24) — Twice Shannon Babb has visited Shepp’s Speedway on the UMP DIRTcar Summernationals circuit, and twice he’s come away the winner. But Thursday’s victory at the quarter-mile oval with the Moweaqua, Ill., driver’s No. 18 creeping around the infield tire barriers was dramatically different than the cushion-banging run of ’09. | Complete Summernationals coverage

Most of Babb’s success on last year’s tour came in a Rocket Chassis with a swingarm rear suspension that the the 36-year-old driver has run most of his career, but he’s been determined to adapt his four-bar suspension Rocket to the series bullrings.

“Last year, we ran here and I kind of run around the top, but I was in that swingarm car,” said Babb, who stretched his series points lead over three-time and defending series champion Dennis Erb Jr. "But in this Rocket here, we’ve actually found something that was really comfortable for me and it’s working pretty good. It’s really idling around the bottom nice and just staying there all night long. I’ve always seen Dennis win a lot of races on the bottom, and it’s usually me on the top, so I’m going to try out his groove for a while.

“I don’t have a lot of four-bar experience, I keep saying that. But I finally found something, I think, that halfway works for me on these little bitty places. That’s what I didn’t have before.”

Babb worked under outside front-row starter and early leader Brian Shirley of Chatham, Ill., on the fifth lap and never looked back, earning $5,000 for his victory on the ninth leg of the 29-race tour that winds through eight states during a month-long stretch.

Seventh-starting Billy Moyer Jr. of Batesville, Ark., cut down Moyer’s half-straightaway lead to nothing amid traffic near the race’s midpoint, but Babb sliced through the traffic faster than Moyer, and when a lap-25 caution for Richie Hedrick’s turn-four spin gave Moyer clear racetrack the rest of the way, the race was over.

"I swear we came to him — maybe I just hit a couple of good laps and he made one mistake and I got close to him — but then he just started opening it right back up,” Moyer said. "Then we caught traffic, and I’m lucky (we got) that caution. I was going to end up fourth or fifth, those guys were camped down on the bottom and couldn’t move, and I don’t want to wreck somebody or spin myself out and cost me a good run. So that (caution) came at the right time.”

“We didn’t have anything for him, no doubt. He drove a great race. Any time you run second to Shannon Babb on the Summernationals, that’s pretty good, isn’t it?”

Moyer settled for his second runner-up finish of the week while fifth-starting Jeep Van Wormer of Pinconning, Mich., who fell back to seventh after 25 laps, made the tricky high groove work long enough in the race’s late staged to get up to third. Van Wormer made up ground on the leaders for a few laps but retreated to the low groove after nearly getting tangled in the thick cushion in turns one and two.

“When everybody went to the bottom and I had the top to myself, I thought, ‘Well, let’s give it a shot,’ ” said Van Wormer, Monday’s winner in Danville, Ill. "We started making some good laps up there, then we made about four bad ones in (turns) one and two, and finally just packed the right-rear (wheel) full of mud, and that ended the run.

“I just strictly was hanging on. I thought I had a flat tire, but we had just packed it full of mud, and it was vibrating really bad, so we went to the bottom to maintain.”

Ninth-starting Rodney Melvin of Benton, Ill., finished inches behind Van Wormer at the checkers while Tim Lance of Brimfield, Ill., was fifth, one spot ahead of Shirley, who fielded Lance’s backup Rayburn Race Car. Besides Hedrick’s lap-25 caution, the only other yellow appeared on the third lap when Brian Dively spun at the ned of the frontstretch, collecting Adam Mefford. Polesitter Jason Feger of Bloomington, Ill., pitted during the caution period to replace a flat tire, giving up the second spot to Babb.

Babb’s biggest problem in maneuvering the lowest groove was making sure his engine kept running at low speeds on the tight oval.

“My motor’s about to stall in the corners,” Babb said. "We’ve gotta crisp up the carburetor a little bit. But low and slow is how you get it done — that’s what (sponsor Ed) Petroff tells me — so we just keep doing that.

“It definitely helps with your confidence. We know what screws to turn. You’re going to pick wrong tires here and there — there’s so many variables, everybody’s going to be off and on every night, you get in a bad groove, or qualify bad or whatever. But this thing here, you just try to do everything right every night and try to get through it.”

Notes: Babb’s Rocket Chassis is sponsored by Petroff Towing, Sheltra Construction and PRC. ... Babb has 61 career Summernationals victories, second on the all-time list to Billy Moyer’s 75. ... Billy Moyer Jr. posted his second runner-up finish on the series, matching his career-best. ... Jack Sullivan led the series points heading into Monday’s event at Vermilion County Speedway but hasn’t cracked the top five since. ... Track provisional Adam Mefford drove Jim Moon’s car after getting caught up in a last-lap wreck in the B-Main in his own No. 7m. ... Brandon Sheppard’s ninth-place finish at his family-owned track was the 17-year-old’s best on the tour. ... Wendell Wallace’s team swapped motors in the primary car during the night while Wallace piloted the backup car after engine woes hit during time trials. ... Next up for the series is Friday’s $10,000-to-win event at Farmer City (Ill.) Raceway.

Heat race winners will redraw for positions and a C-Main will send its top finishers to the B-Main. The B-Main lineup:

(Plus cars transferring from C-Main)

Making the low groove work, third-starting Shannon Babb slipped under outside front-row starter Brian Dively midway through the race and pulled away for a victory. While Babb got the checkers, polesitter Brandon Sheppard got the cheers with a lap-eight slide job on Dively that elevated him from fourth to second. Dennis Erb Jr.’s low-side move dropped Dively to the fourth and final transfer spot. Jason McBride was a distant fifth. A lap-four caution appeared for Rick Standridge between turns one and two.

In a heat where outside front-row starter Jeremy Conaway lost the early lead when he got into the turn-two wall on the fourth lap, polesitter Jason Feger cruised the rest of the way in the caution-plagued 10-lap prelim. Tim Lance raced from the tail in a smoking car to finish second while fifth-starting Michael Kloos and third-starting Jason Jameson got the other transfer spots. Several incidents slowed the action, starting with Conaway’s mishap. Brandon Thirlby spun in turn two on the lap-four restart to draw the race’s second yellow. A third caution appeared midway through the race when Jim Moon, Adam Mefford and others got tangled up, also in turn two. Brian Harris was running third midway through the race when he pulled pitside with a loose left-rear wheel during a caution period. Conaway, the early leader, stopped to draw the race’s final caution in turn four on the seventh lap.

Outside front-row starter Ryan Unzicker got the jump on polesitter Jeep Van Wormer and led all the way in the 10-lapper. Van Wormer followed Unzicker in the high groove all the way while Rodney Melvin worked a lower groove to finish third. Jack Sullivan got the fourth and final transfer spot, holding off Steve Sheppard Jr. in the final laps. Third-starting Steve Lance Jr. slipped back to finish sixth. Dick Taylor spun in turn two early the draw the race’s first caution, then spun again with Bryant Dickinson a few laps later.

The only driver to crack the 12-second mark, Jeep Van Wormer of Pinconning, Mich., topped 43 qualifiers at Shepp’s to earn the pole position for the first heat race. Van Wormer posted a lap of 11.888 seconds on the quarter-mile oval to notch his series-leading third fast time on the tour.

The weather isn’t nearly as hot as the previous three races with temperatures in the lower 80s. “It’s like working in air conditioning,” said Arkansas driver Wendell Wallace. ... Racers never claim to be flush with money, but Jack Sullivan said he’s at rock bottom after spending time in St. Louis in recent days. “After two nights at the casino, we are officially broke,” Sullivan said. “I actually did pretty good, but I loaned what I wont to Wendell. That makes me a big dumb loser.” ... Former Summernationals champion Pete Parker plans to return to action after problems with his power steering pump following hot laps Wednesday at Belle-Clair. The team had three spares at home, but none on the road, and spent Thursday getting necessary parts from Mullins Race Engines in Mount Olive, Ill., and from Bill West Enterprises in Jacksonville, Ill., to make repairs. Parker has entered all but the first two events. “I guess I could go home and help my wife in the garden,” he deadpanned. “No, that’s not an option.” ... Don Hoener, competition director for Wednesday’s event at Belle-Clair, was treated and released at a Belleville, Ill., for a hairline shoulder fracture after last night’s series event, chaplain Tim Bozarth said. Hoener works with the St. Louis-area Allied Auto Racing Association. ... Brian Shirley is driving a Tim Lance backup car at Shepp’s. ... Gerry Reeder slammed into the wall between turns three and four during his qualifying lap and didn’t get a time.