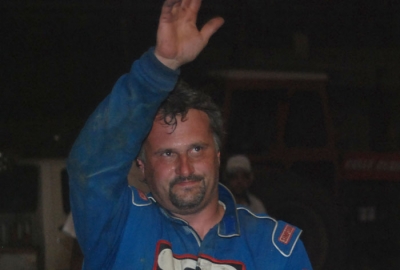 It all worked out for the polesitting Erb, who earned $5,000 on the eighth leg of the UMP DIRTcar Summernationals and won at the tiny fifth-mile fairgrounds oval near St. Louis for the second year in a row on the series. | Complete Summernationals coverage

“We’re fortunate ... the last two years to win this thing and run good here,” said the 37-year-old driver from Carpentersville, Ill. “We’ll just take it as they go, one by one.”

At a tight, bump-and-grind bullring where drivers often battle for the same piece of real estate, Erb was at his best in the second half the race when he edged away from the series points-leading Babb and put his light-blue No. 28 in the middle of the track.

“I knew the middle of the track there, right before that (lap-23) caution came up, I started feeling pretty good through the middle there. I was hoping (Babb) would go back up to the top so I could start rolling the middle there, and it worked out pretty good for us,” said Erb, whose first series victory of 2010 is the 14th of his career. “We ran side-by-side for a long time. We both kept it straight until we got to the point where the middle started to clean off, and we started rolling pretty good there.”

Erb jumped into the lead at the outset, but the fourth-starting Babb of Moweaqua, Ill., got rolling in the high groove and edged ahead to lead the sixth lap. Contact with the wall broke part of Babb’s rear spoiler in the early laps, and he never got much breathing room over Erb as they parted ways in the corners and came together on the straightaways lap after lap with fifth-starting Jeep Van Wormer of Pinconning, Mich., close behind.

When Brandon Sheppard slowed on the 24th lap — with Erb narrowly avoiding a backstretch collision with Sheppard’s slowing car — for the 40-lap feature’s second and final caution, Erb used the restart to edge ahead on lap 25 while Babb fell into a wild scramble for second that included Van Wormer, outside front-row starter Billy Moyer Jr. of Batesville, Ark., and the third-starting Melvin of Benton, Ill.

Melvin fought his way through the tight pack — at one point earning a gesture of exasperation from Moyer when the 22-year-old flung his left arm at the window exiting turn two — but by the time Melvin reached second on lap 31, he was more than a full straightaway behind the cruising Erb.

Melvin quickly cut into the lead, catching Erb as the leader ran upon lapped traffic in the final laps. But Melvin didn’t catch Erb until the white-flag lap and never had the opportunity to make a serious bid for the lead, settling for second.

“Once we got by Babb and Jeep and Moyer there, the car just took off," Melvin said. "I knew it was going to be pretty good through the middle. We just ran out of laps there at the end."

Van Wormer, the night’s fast qualifier, finished in the third spot that he held most of the way while Moyer and Babb rounded out the top five. Belle-Clair regular Frankie Martin picked up four positions to finish sixth, the best among track locals.

Babb unofficially retains his Summernationals lead with 522 points while Erb, who has three straight top-five finishes after failing to reach that standard in the first five events, is up to second with 498 points. Jason Feger of Bloomington, Ill., who finished ninth at Belle-Clair, falls to third in points with 497.

Notes: Erb’s Rayburn Race Car has a Vic Hill Racing Engine and sponsorship from Thomason Express and McBride Mack. ... The first of two cautions appeared when Mark Burgtorf slowed with a flat left-rear tire on the third lap. ... Jack Sullivan, who briefly led the series points earlier in the week, posted his worst finish of the series with a 17th at Belle-Clair. ... Ryan Unzicker finished 14th in a car that’s still occasionally misfiring; the team has made several changes in trying to find the problem that cropped up at the conclusion of Monday’s feature in Danville, Ill. ... The series moves to Shepp’s Speedway in Alexander, Ill., on Thursday for a $5,000-to-win event.

In the redraw among heat winners, last year's race winner Dennis Erb Jr. drew the pole with Billy Moyer Jr. alongside. Rodney Melvin and Shannon Babb are in the second row. ... Jack Sullivan gets the series provisional, Brandon Sheppard gets the UMP provisional based on '09 UMP points and Mike Hammerle gets the track provisional. .. Donny Walden gets his second series feature start, the benefactor of the Brian Harris-Brandon Sheppard tangle in the fourth heat. But Walden, whose team rebuilt a rear end during last night's action at Highland Speedway, was glad luck turned his way. Walden runs a graphics business and petitioned his customers to order race car graphics before he hit the road for the Summernationals, but he said his voicemail is filling up with requests. "Pound it out," Walden says he tells them. "It can't look any worse than my car." ... Clay Baumann was as surprised as anyone when he saw a golf cart on the backstretch during his qualifying lap. "It totally killed my qualifying," said Baumann, who quickly got on the brakes when he saw the cart. A gate worker told Baumann the cart driven by a fairgrounds security guard and carrying promoter Stan Schanter slipped onto the track when he wasn't looking.

Third-starting Brent Kreke slipped by polesitter Nick Lyons on the first lap, then outdueled Justin Ketrow in a side-by-side battle to take a lead he'd never give up. Seventh-starting Michael Kloos worked the low groove throughout, inching into contention and taking the second and final transfer spot in the final laps. Rick Standridge was third. The first start was called back by a turn-one scramble among several cars that left Jim Moon's machine partially perched on Dan Jacober's car. C-Main winner Dave Thornton was deep in the field.

Polesitter Dennis Erb Jr. drove a smooth, steady race for an easy victory while outside front-row starter Mark Burgtorf held off an early challenge from third-starting Brian Harris and ran second all the way. Harris, who spun in turn three on the seventh lap but got the spot back when officials rule Brandon Sheppard caused the spin, was third and Donny Walden was fourth to qualify for his second series feature of the year. Tail-starting Rick Standridge rallied to finish fifth. Jimmy Burwell spun between turns one and two on the second lap to draw the race's first yellow flag.

Billy Moyer Jr. became the third straight outside front-row starter to win a heat, holding off repeated challenges from fourth-starting Jason Feger for the victory. The throttle-stomping Feger tried high, low and everywhere in between but settled for second, twice narrowly escaping brushes with the wall. Polesitter Jim Gibson Jr. was third and Ryan Unzicker a distant fourth in the final transfer spot.

Outside front-row starter Rodney Melvin outran polesitter Mark Voigt for a victory in the 10-lapper, winning by more than a half-straightaway. Frankie Martin was third and Wendell Wallace, who got too high in turn one on the first lap, regained three lost spots to finish in the fourth and final transfer spot. Rodney Standerfer ended up askew in turn four on the first start with fuel leaking from the rear of the car; he rejoined the field after the cleanup.

Outside front-row starter Shannon Babb got the jump on polesitter Jeep Van Wormer and led the rest of the way. Babb and Van Wormer both worked the low groove while a few drivers further back tried the high side, including Nick Lyons, who banged the frontstretch wall just past the race's midpoint. Babb as more than a straightaway ahead at the finish while Jason McBride finished third, just behind Van Wormer. Mike Schulte was fourth to qualify for his second straight Summernationals main event. Dave Thornton spun on the second lap in turn one to draw the race's lone caution.

Jeep Van Wormer of Pinconning, Mich., was fastest among 37 qualifiers Wednesday at tiny Belle-Clair Speedway on the eighth leg of the 29-race UMP DIRTcar Summernationals. Van Wormer’s lap of 11.460 seconds at the fifth-mile oval puts him on the pole of the first heat race. Other heat race polesitters after group qualifying: Mark Voigt of Marine, Ill.; Belle-Clair regular Jim Gibson Jr. of O'Fallon, Ill.; and Dennis Erb Jr. of Carpentersville, Ill.

The top four finishers from four heat races transfer to the main event. C-Mains and a B-Main, which transfers two drivers to the main event, fill the 21-car field, which includes three provisional starters.

A brief scare in time trials came during Clay Baumann’s qualifying lap when a track security worker unwittingly pulled a golf cart onto the track at the turn-two entrance. The cart, carrying track promoter Stan Schanter, was rolling the backstretch when Baumann exited turn two and abruptly braked upon seeing the obstacle.

Three drivers got into the wall during time trials: Richie Hedrick, Jack Sullivan and Jay Sparks. Sullivan was able to pull away, Hedrick was towed off and the No. 7 of Sparks ended up with its right-side wheels perched on the walls before it was towed away. ... Rodney Melvin’s Belle-Clair qualifying record of 11.260 seconds, set June 20, 2004, still stands. ... Two-time series champion Shannon Babb leads the series points, going back ahead following Tuesday's victory at nearby Highland Speedway. ... Previous series winners in two visits to Belle-Clair are Will Vaught of Crane, Mo., in '08 and last year by Dennis Erb Jr. of Carpentersville, the three-time series champion who is fourth in series points. ... Just 54 points separate the top five in series points led by Shannon Babb (457) and followed by Jason Feger (443), Jack Sullivan (427), Dennis Erb Jr. (28) and Ryan Unzicker (24). ... Besides Late Models, Belle-Clair's modifieds (fewer than a dozen) and sportsman are also in action. ... Michael Kloos of Trenton, Ill., leads Belle-Clair’s weekly UMP points in the Late Model division.