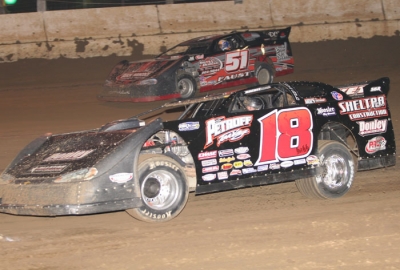 Polesitter Rodney Melvin of Benton, Ill., led the first 21 laps, but the fifth-starting Babb worked the low groove to get under Melvin and Jason Feger of Bloomington, Ill., and take command on lap 22. The three ran a variety of high, low and middle grooves while battling the rest of the way around the tight quarter-mile oval near St. Louis. Babb eventually settled on the high line.

“We had several grooves and it was really hard to make that decision,” he said. "It just seemed like I got to where I was at by running around that bottom, and I kind of looked those guys over. ... I just figured I’d get up there and move around and try it. Along the straightaways on the outside, it had a lot of traction, so I just stayed up there and got my momentum going.

“I kept looking for Jason to give me a slide job, and I was going to slide him back. I thought we were going to have some fun there for a minute. That was a fun race.”

Feger started third and ran second throughout the race, chasing Melvin the first half of the race and chasing Babb the rest of the way.

“It seemed like every time I had a run, nothing went my way,” Feger said. “I just pulled up to Melvin and got the top working real good, and the yellow came out. So he got the signal to get to the top, and I just couldn’t quite get it done on the bottom.

“I got boxed behind him and Shannon snuck by us, and I get a good run on (Babb) and the (lap-39) yellow comes out. I just couldn’t get around him. We had an awesome car ... it was just an awesome race. I mean, all three of us were right there at the end. It was a good little track, and they worked (the surface) before the feature, and I think there was a packed house here, and I think everybody got their money’s worth.”

Babb notched his series-leading third career victory at Highland. His previous victories came in 2004 and ’05. He also regained the series points lead from Jack Sullivan of Greenbrier, Ark., who was never a factor in finishing 10th.

Three cautions slowed the action. Van Wormer got sideways in turn one on the fourth lap, stacking up Brandon Sheppard, Billy Faust and Sullivan. The second appeared when Billy Moyer Jr. lost his driveshaft on the eighth lap and the final yellow fell for Van Wormer’s flat after the white flag appeared.

Sixth-starting Jason Jameson got rolling in the high groove, going from fourth to first after a lap-four restart to take the lead on the sixth lap. He led the rest of the 12-lapper to advance to the main event along with polesitter Mike Schulte, who stuck with the low groove all race long. Third-starting Brian Harris tried to followed Jameson past Schulte but couldn't make the high groove work. Among cautions slowing the action was a lap-four yellow when Brandon Thirlby got into Mike Hammerle, triggering a stackup between turns one and two. Billy Moyer Jr. scratched while Michael Kloos and Frankie Martin dropped out, but all got provisionals for the main event (Moyer for the series, Kloos for '09 UMP points and Martin for track points).

Ryan Unzicker sensed an electrical problem at the conclusion of Monday’s feature in Danville, Ill., and despite going through the motor to look for a problem, it still wasn’t solved Tuesday. The team swapped batteries but still couldn’t get the car to fire for qualifying. Afterwards, they discovered the tip was off one of the spark plugs, and Unzicker said he suspects that a bad distributor wire caused all the problems. He got it fixed to run the heat race and finished fourth, but he was only running on six cylinders because all the spark plug wires didn’t get reconnected after their scrambling. “I guess we got lucky,” Unzicker said. “The car felt good, just no power. Hopefully that’s out of our system.” ... Paul Bailey finished second in his heat race after Brandon Sheppard’s lap-eighth slide job dropped him out of the lead. Bailey tried to duplicate Sheppard’s move on the last lap, but thought better of it after diving low in turn one. “I almost was going to close the door, but I said, ‘Second’s not too bad,’ ” Bailey said. The 29-year-old Bailey drives a 2007 Pierce Race Car formerly driven by Georgia’s Seth Wimpey. ... Donny Walden broke a rear end in time trials. He missed his heat race as the team scrambled to rebuild the rear end, and they made it out in time for the C-Main, but he failed to transfer to the B-Main. ... Richie Hedrick lost a transfer spot in his heat race when he slowed and pulled to the infield; the team later discovered a broken battery cable. He won a C-Main to advance to the rear of the B-Main. ... Billy Moyer Jr. is in line for a series provisional; he dodged a bullet when hit car wasn’t damaged too badly in a first-lap scramble in a C-Main, which he won.

Richie Hedrick and Billy Moyer Jr. won C-Mains, while Frankie Martin and Dennis Vandermeersch were second. All four transferred to the rear of the B-Main below (top two transfer to main event):

Rodney Melvin is on the pole after the drawing among heat winners. Mark Faust, Jason Feger and Brandon Sheppard round out the top four starting spots. Coming up are two C-Mains and a B-Main all 12 laps apiece. The top finishers from the C-Main transfer to the B-Main, which sends two drivers to the main event lineup.

Polesitter Rodney Melvin edged away in the opening laps and wasn't challenged the rest of the 10-lapper. The battle for second was a tight one between outside front-row starter Mark Burgtorf and third-starting Billy Faust who got underneath the higher running Burgtorf and took the spot just before the halfway point. Burgtorf stayed with him the rest of the way but settled for third after switching from the high to low groove, and track points leader Chad Zobrist got the final transfer spot in fourth. Zobrist and Jeremy Conaway tangled in turn one on the first lap, forcing a restart.

Outside front-row starter Jason Feger got the jump on polesitter Jeep Van Wormer and cruised to a 10-lap victory in the caution-free prelim. Van Wormer fought off the fifth-starting Dennis Erb Jr. for second as Erb, wrestled the third spot Wendell Wallace midway through the race before battling Van Wormer side-by-side. Wallace got the final transfer spot while Brian Harris was further back in fifth.

Fourth-starting Brandon Sheppard's dramatic lap-eight slide job in turn four on race-long leader and polesitter Paul Bailey gave him a 10-lap victory in a caution-plagued prelim. Bailey tried to answer the crowd-pleasing move with his own slide job between turns one and two on the last lap, but Sheppard held on. Bailey was second while series points leader Jack Sullivan, languishing near the back of the pack most of the race, was third after several drivers dropped out. Jay Sparks got the fourth and final transfer spot. Fifth-starting Richie Hedrick got up to second early and held that spot until losing it to Sheppard as the two banged together down the frontstretch near the race's midpoint. But Hedrick couldn't regain second and eventually dropped out. Three cautions slowed the action. Frankie Martin spun exiting turn two on the fourth lap in a scramble that also involved Tim Manville; Martin retired. Rick Standridge slowed on the sixth lap then pulled to the infield. Third-starting Clay Bauman spun between turns one and two on the lap-six restart when it appeared Hedrick briefly lost power, stacking up cars behind him. Hedrick lost power for good just after the last restart and pulled to the infield.

Outside front-row starter Mark Faust jumped into the early lead and led all the way, turning back several challenges from fourth-starting Shannon Babb in the caution-free 10-lapper. Polesitter Kevin Cole slipped back to third early but hung with the top two the rest of the way. Ryan Unzicker, who didn't get a qualifying time because his car didn't fire for time trials, made a last-lap pass of Mike Schulte to get the fourth and final transfer spot.

Kevin Cole of Christopher, Ill., was fastest overall among 43 qualifiers Tuesday at Highland Speedway for the seventh leg of the 29-race UMP DIRTcar Summernationals. Cole’s lap of 13.613 seconds put him on the pole of the first heat at the quarter-mile oval near St. Louis, Mo.

Jack Sullivan of Greenbrier, Ark., leads the tour points after six events, three points ahead of two-time champion Shannon Babb. The championship pays $25,000. ... Fast qualifier Kevin Cole, who drove a Scott Riggs-owned car in recent years, is fielding his own No. 3c this season. He has two victories at Paducah (Ky.) International Raceway, one paying $3,000. ... The two fastest qualifiers, Cole and Rodney Melvin, were the first car out and the last car out. ... Glitches with the electronic timing clock delayed qualifying several minutes before officials decided to time by hand. During the delay, one fan behind the timers yelled “pill draw!” ... First qualifier Ryan Unzicker of El Paso, Ill., fifth in series points, couldn’t get his car to fire for his qualifying lap; crew members later discovered a tip was broken off one of the spark plugs. ... Donny Walden also had some kind of mechanical issues after taking the green and didn’t get a time. ... Nick Lyons got out of shape exiting turn two on his lap. ... Sixteen drivers have entered all seven events (Brian Shirley skipped Highland, the first race he’s missed). ... Among series newcomers: Highland weekly points leader Chad Zobrist, Frankie Martin, Paul Bailey and long-time UMP veteran Mike Hammerle. ... Highland has moved its infield announcer’s box up to the top of the grandstands for the 2010 season. ... Four-time weekly UMP champion Rodney Melvin is back in his Rayburn Race Car after a hole in the radiator knocked him out of a heat race Monday at Vermilion County Speedway. ... Rodney’s older brother Bobby Melvin is fielding a Warrior Race Car formerly owned by their sister Theresa. ... Billy Faust is driving the No. 00 for Kehrer Bros. Roofing teammate Randy Korte, last year’s Summernationals points runner-up who is on medical leave after back surgery.