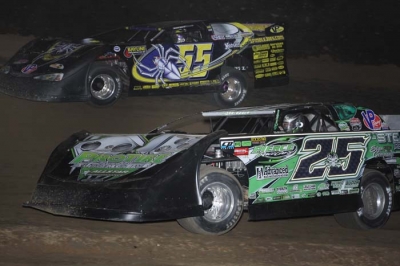 Van Wormer, who also won in the quarter-mile oval in 2008, turned back an early challenge by fifth-starting Jason Feger of Bloomington, Ill., who appeared to edge ahead just before a lap-14 caution for a turn-four scramble. | Complete Summernationals coverage

The yellow flag reset the field with Van Wormer on the point, and he was never headed again. Outside front-row starter Dennis Erb Jr. of Carpentersville, Ill., the three-time and reigning series champion, finished second for his first top-five finish on the tour. He fought off challenges from third-finishing Ryan Unzicker of El Paso, Ill., while Feger fell back to fifth behind Brian Shirley of Chatham, Ill., in the closing laps.

Jack Sullivan’s sixth-place finish unofficially moved the Greenbrier, Ark., driver into the Summernationals points lead over Shannon Babb of Moweaqua, Ill., who lost a wheel in his heat race and took a provisional in the feature, finishing ninth.

Van Wormer earned $5,000 for his 12th career Summernationals victory and turned things around after a broken rear end on the 19th lap of Sunday’s event at Wilmot (Wis.) Raceway knocked him out of the lead.

"It's huge for our team," Van Wormer said. "We had a pretty tough Cedar Lake, and then at WIlmot, we ended up breaking a rear end. So for us to come back and win is definitely redemption. It boosts everybody's morale."

Van Wormer worked the high groove from the outset while Feger immediately went to the hub and tracked the leader, drawing close after a dozen laps. The frontrunners battled side by side and Feger was edging ahead when the race’s first caution appeared on lap 14 as mid-packers Pete Parker, Billy Moyer Jr. and Greg Johnson tangled in turn four, with Parker stopping on the track and Moyer spinning into the infield. Parker retired while Moyer rejoined the field at the tail and finished 10th.

Van Wormer easily pulled away on the restart, building a half-straightaway lead before the midpoint while Erb took second from Feger before the second and final yellow appeared on the 20th lap for Brandon Sheppard, who slipped over the banking.

On the restart, Van Wormer got some breathing room when Erb, Feger and Unzicker briefly ran three wide in turn four. Erb and Unzicker battled for second the rest of the way while Feger eventually gave up his low groove and chased them in fourth before losing that spot late in the race.

Erb cut Van Wormer’s half-straightaway lead at the 30th lap down to a few lengths at the finish, but he never seriously challenged the winner, who thrust his left arm in the air as he took the checkers.

Notes: Van Wormer’s Iron Motorsports Rocket Chassis is sponsored by Bayline Fire Protection and Globe Technologies. ... The checkered flag flew about 9:15 p.m. as the track was in hurry-up mode with lightning and rain in the area, but no precipitation fell. ... Van Wormer had three series victories in 15 feature starts last year. ... Fifteen of 21 starters were running at the finish. ... Up next on the 29-race tour is a $5,000-to-win race on Tuesday at Highland (Ill.) Speedway, one of the three tracks where Van Wormer won in ’09.

Richie Hedrick won the B-Main to transfer to the main event along with Nick Lyons. With rain nearing the track, officials scrapped C-Mains and went with a single consolation race. ... Dillan White, who finished second in the second heat, will give up his feature spot after breaking a motor. The hefty White isn't likely to find a car he can fit in, so it's likely UMP will name some sort of replacement. ... Wilmot winner Rodney Melvin's night is over after something punctured his radiator in his heat race; his backup car had a different kind of radiator and he couldn't find a replacement. ... Series points leader Shannon Babb said his left-rear wheel came off in his heat race because the lugnuts weren't tightened. In the crew's defense, he said, it was a "fire drill" between qualifying and the heat race in changing an oil pump. He'll get the series provlsional and start in the 10th row. ... Wendell Wallace, third in the B-Main, has also been added to the main event lineup, apparently replacing White. ... Jay Sparks got the track provisional. ... Officials started calling drivers to the track at 8:40 p.m. for the main event. ... After three pleasant evenings, typical hot and humid Summernationals weather hit Danville.

Three-time series champ Dennis Erb Jr., winning his first heat of the series, drew the pole for the 40-lap feature. Other heat winners drawing for positions were Jeep Van Wormer (outside the front row), Jason Feger (inside second row) and Ryan Unzicker (outside second row).

Polesitter led all the way for a 10-lap victory and earn a spot among the first two rows of the main event. Brian Shirley was second followed by Brandon Sheppard, who spun exiting turn four early in the race but was given his spot back after Jay Sparks was charged with rough driving. Jason McBride got the fourth and final transfer spot for his first Summernationals feature start. Matt Rhyne, driving an Unzicker backup car, was fifth. Sparks ended up spinning his smoking machine between turns three and four late in the race and pulled out. Series points leader Shannon Babb lost a left-rear wheel and pulled off during an early caution.

Dennis Erb Jr. caught race-long leader and polesitter Jason Jameson at the checkers when Jameson got too high and scraped the frontstretch wall. Bobby Pierce and Billy Moyer Jr. got the other two transfer spots while front-row starter Scott Schmitt struggled early and pulled out of the race.

Third-starting Jason Feger slipped into the lead on the first lap and never looked back for a 10-lap victory in a caution-free prelim. White held on for second while Mark Burgtorf regained the third spot from Pete Parker in the closing laps. Those four transferred to the feature while front-row starter Rodney Melvin, last night's series winner in Wilmot, Wis., pulled off the track.

Polesitter Jeep Van Wormer led all the way, holding off a late challenge from Jack Sullivan. Greg Johnson and Brian Harris got the other two transfer spots in the caution-free 10-lapper.

Jeep Van Wormer of Pinconning, Mich., who broke last night leading at Wilmot (Wis.) Raceway, rebounded Monday at Vermilion County Speedway by setting fast time in the sixth leg of the UMP DIRTcar Summernationals. Van Wormer’s lap of 13.181 seconds on the quarter-mile oval puts him on the pole of the first heat race.

The top four finishers from each of four heat races transfer to the main event, along with two cars from a B-Main. Three provisional starters round out the 21-car field. The night’s 40-lap feature pays $5,000 to the winner on the 29-race tour that covers 28 tracks and eight states in 32 days.

Two-time series champion Shannon Babb enters the night leading the tour with 318 points, three more than Jack Sullivan of Greenbrier, Ark. ... Three-time and defending champion Dennis Erb Jr. of Carpentersville, Ill., is seventh in series points, five spots ahead of Rodney Melvin of Benton, Ill., who won Sunday’s feature at Wilmot (Wis.) Raceway. ... Seventeen drivers have entered all six events. ... Among drivers returning to the series are Jason Jameson of Lawrenceburg, Ind.; Greg Johnson of Bedford, Ind.; and Dillan White of Crofton, Ky. ... Among newcomers are Brian Harris of Davenport, Iowa (winner of four straight at Peoria Speedway) and Nick Lyons of Centralia, Ill., winner of Saturday’s weekly feature at I-55 Raceway in Pevely, Mo.