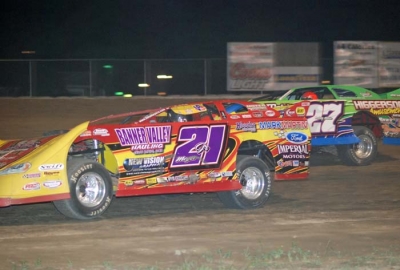 WILMOT, Wis. (June 20) — Making a rousing high-side charge in the final laps, Rodney Melvin swept around Billy Moyer Jr. late in a 30-lapper at Wilmot Raceway to capture the fifth leg of the UMP DIRTcar Summernationals. Melvin earned $5,000 for his fifth career series victory and first since last June 23 in Charleston, Ill.

“I’m glad to get one,” said the 36-year-old driver from Benton, Ill. "We’ve only raced about four or five times this year. I was about ready to hang my hat up, but I guess we’re ready to go for the rest of the thing now.”

Melvin’s Summernationals started with a broken driveshaft in the first heat of the series opener at Brownstown (Ind.) and hadn’t gotten a lot better. His best finish among the first four races was a 10th-place run at Kankakee County (Ill.) Speedway.

Likewise, Melvin’s race at Wilmot got off to a slow start as he was third on the grid but dropped back to fifth in the first few laps.

“The car was a little tight at first. We just kind of rode around, and we were lucky we got those couple of cautions,” Melvin said. "I just got lucky and went around him. We got here. I knew which car to unload. These Rayburn cars, they’re hard to beat on stuff like this.”

Moyer led Melvin back to green on a lap-23 restart, and Melvin jumped to the high side, eventually sweeping around the 22-year-old from Batesville, Ill., in turns three and four.

“They weren’t going to beat me on the hub,” the low-running Moyer said. "I was going to make ‘em blast around me ... Melvin did a good job.”

Moyer, who inherited the lead when race-long leader Jeep Van Wormer of Pinconning, Mich., broke a rear end on the 19th lap, settled for second with Shannon Babb of Moweaqua, Ill., in third. Jack Sullivan of Greenbrier, Ark., and 13th-starting Matt Miller of Waterville, Ohio, rounded out the top five in a race shortened to 30 laps from a scheduled 40 because of anticipated rough track conditions.

Van Wormer started on the pole and built a half-straightaway lead on fellow front-row starter Bub McCool of Vicksburg, Miss, in the first dozen laps, and Van Wormer threatened to turn it into a runaway by the halfway point.

But four laps later, Van Wormer slowed and coasted to the infield to draw a caution, handing the lead to Moyer, who had slipped under McCool for second a lap earlier. It was Moyer pulling away on the next restart while McCool, Melvin, Babb and Sullivan gave chase.

A high-running Babb got into McCool entering turn three on the 23rd lap, knocking McCool out of contention and resetting the field with Moyer ahead of Melvin, Sullivan and Babb. When the green came out, Melvin jumped to the high side and began pressuring Moyer, eventually pulling alongside in turn three and edging away in the final laps.

Melvin’s victory after four subpar nights raises his hopes as the tour winds toward tracks closer to his southern Illinois home.

“We head back to the tracks within a couple of my hours of the house,” said Melvin, who was 15th in points heading into the race. "I really needed this, so I believe we’ve got a lot of confidence going into this, and I think we can get a pretty good outcome.”

Babb's third-place finish moved him into the series points lead ahead of an absent Billy Moyer of Batesville, Ark., who won the first series series events. Babb has 318 points to lead Sullivan (315) and Jason Feger (298), who finished 10th.

Jeep Van Wormer starts on the pole ahead of Bub McCool, Rodney Melvin and Billy Moyer Jr.; the heat winners redraw for starting spots. ... Officials have decided to run a 30-lap feature instead of the usual 40. ... Also, instead of a single C-Main with two cars transferring, two C-Mains will send one driver apiece to the main. ... Brad Mueller of Random Lake, Wis., was third in the final heat to qualify for his first-ever UMP Summernationals feature. The WDLMA regular raced once before at Wilmot, leading late before a broken axle knocked him out of the race. ... Before the C-Mains, Jason Feger’s team busily repaired the broken driveshaft and other problems on his No. 25. The driveshaft was knocked off when the ladder bar broke off the lift arm. ... Mark Voigt is frustrated with his brand new Rocket Chassis, a 6-race-old car that’s supposed to be just like his other Rocket but isn’t performing well at all. “I wish someone would steal it,” Voigt said, only half joking. “It feels like I’m dragging around a trailer with a jack underneath it.” Voigt has gone through the car twice but has yet to discover why it’s struggling; he plans to run his primary car starting Monday in Danville, Ill. ... Bub McCool drew the outside the front row starting spot for the feature after winning the fourth heat. He nearly spun in turn two early in the heat before finally making a high-side pass of leader Brandon Thirlby. “I thought I about lost it,” McCool said. ... Shannon Babb wasn’t pleased with how his No. 18 worked in the outside groove, so the crew made some changes to take some bite out of the left rear. How does Babb like a track that’s lightly banked and tight in the corners? “It’s the Summernationals,” he said with a smile.

Series newcomer Billy Rezutek of Big Bend, Wis., topped 31 qualifiers Sunday at Wilmot Raceway for the fifth leg of the UMP DIRTcar Summernationals. Rezutek posted a track-record time of 16.147 seconds on the 3/8-mile oval that’s hosting the series for the first time.

Other heat race polesitters following group qualifying: Billy Moyer Jr. of Batesville, Ark.; Rodney Melvin of Benton, Ill.; and Brandon Thirlby of Traverse City, Mich. The top four drivers from each of the four year races will transfer to the main event, with the top two finishers from the C-Main transferring, too. Three provisional starters round out the 21-car field.

The 29-race Summernationals tour is running its third Wisconsin event of the season after two races at Cedar Lake Speedway in New Richmond, Wis.; the series hadn’t visited Wisconsin since 2003. ... Mark Voigt slipped over the turn-three banking on his qualifying lap, costing him about 30 seconds. ... Chris Carlson took an infield shortcut through turn four on his lap after getting out of shape. ... Jay Crichton is running a vintage American Made chassis. ... Jayme Zidar’s car sounded to be misfiring on his qualifying lap, and he ended it on a flat left-rear tire.