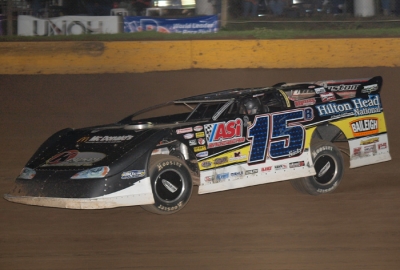 The polesitting Vaught led all 40 laps of the fourth leg of the 29-race series, but after going through a victory lane celebration, he was disqualified moments later in a decision never announced to departing fans.

Birkhofer’s $10,000 victory ended the three-race win streak of Billy Moyer of Batesville, Ark., who lost power on the 10th lap with a broken powerplant while running ninth.

"I don't really want the trophy. I'll take that extra five-grand, though," Birkhofer said. "Will Vaught drove a good race. He had the best car."

Vaught was in firm control most of the race, but the front-row starting Birkhofer turned up the heat with 10 laps remaining, nearly pulling alongside. But after a lap-32 caution, Vaught led comfortably the rest of the way and officials sent him to victory lane before postrace weigh-in. Vaught didn't want to comment after his disqualification.

Brian Shirley of Chatham, Ill., was moved up to second in the final rundown followed by Ryan Unzicker of El Paso, Ill., and Jason Feger of Bloomington, Ill. Matt Miller of Waterville, Ohio, rounded out the top five in the 40-lap feature.

Sixth-starting Shannon Babb of Moweaqua, Ill., ran as high as third and challenged Birkhofer for second on lap 32, but he slowed with engine problems on lap 38.

Polesitter Chad Simpson led all the way to win the B-Main, and he'll transfer to the feature along with runner-up Eric Pember.

Polesitter Adam Hensel survived a turn-four miscue midway through the race, pulling back away from fellow front-row starter Jimmy Mars the rest of the way for a victory. Hensel slipped high on the fifth lap but gathered up his car to complete the victory. Mars, meanwhile, had his hands full with Rodney Melvin, who ended up third. Brady Smith got the fourth and final transfer spot over Jack Sullivan, while Wendell Wallace continued to struggled, finishing far behind. The race was red-flagged on the first start when Jon Rogers barrel-rolled out of turn two and down the backstretch. Rogers, making his debut at Cedar Lake, wasn't injured. Jeff Keeney suffered some apparent spoiler damage in the incident and ended up a lap down while Richie Hedrick pulled pitside midway through the race.

Outside front-row starter Brian Shirley outraced polesitter Pat Doar on the first lap and cruised to a 10-lap victory on a race where virtually everyone ran the high side on a fast track. Shirley took the checkers a half-straight ahead of Doar while third-starting Billy Moyer, last night's feature winner, was right on Doar's tail most of the way. Matt Miller was fourth as the top four broke away from the field. Fourth-starting Jeep Van Wormer nearly lost it in turn two on the first lap, but a near-scramble on the backstretch was avoided and Van Wormer settled into fifth for the distance. Jim Moon pulled to the infield midway through the caution-free prelim.

Polesitter Will Vaught stole the high line from fellow front-row starter Shannon Babb going into turn one on the first lap and held the lead all the way. Babb turned up the heat on the final lap, nosing up against Vaught's rear deck at the white flag, but he couldn't find a way past. Bub McCool was further back in third in the 10-lap prelim, just ahead of Jason Feger, who won an early race duel between No. 25 cars for the fourth and final transfer spot over Chad Simpson. Everyone else was more than a half-track behind Vaught in the caution-free race.

Outside front-row starter Brian Birkhofer got the jump on polesitter Ryan Unzicked and pulled away throughout for a half-straightaway victory. Second-row starters Dennis Erb Jr. and Chris Simpson got the third and fourth spots on a fast track that was watered just before the 10-lapper. Eric Pember, fourth in Friday's feature, was fifth and will head to the B-Main.

Will Vaught of Crane, Mo., lowered the Cedar Lake Speedway record Saturday with a 13.044-second lap for the fourth round of the UMP DIRTcar Summernationals. Crane, lowering the mark set by hometown driver Pat Doar the previous night, will start on the pole of the second heat race at the 3/8-mile oval. | Complete Summernationals coverage

The 29-race Summernationals, a month-long tour which covers eight states, is enjoying a rare doubleheader weekend at one track.

The track record was broken two consecutive nights; before this weekend, Earl Pearson Jr. of Jacksonville, Fla., held the record with a lap from 2006. ... One driver was a no-show from Friday’s racing (Jim Bruggeman) while two new drivers joined Saturday’s action: Jon Rogers of German Valley, Ill., and Kenny Mann of South St. Paul Park, Minn. ... Mann was piloting a vintage Late Model that hadn’t hit the track since the Cedar Lake season finale in 1987 when he rallied from the tail for a victory; he parked the car because the track changed engine rules the next season, outlawing open-competition engines. ... Brandon Thirlby of Traverse City, Mich., hopes to make his first 2010 Summernationals feature Saturday after discovering problems with his No. m14’s right-rear shock. “I knew it was running flat all week,” Thirlby said. “We finally figured it out.” The team made repairs on the shock for Saturday’s action. ... Zach Johnson, whose heavily damage the front end of his No. 73 in a first-lap accident Friday, made repairs to his car. Parts of the bodywork were borrowed from Jason Feger’s team and he borrowed a radiator from Mike Nutzmann. ... Besides bending a spindle in Friday’s feature, runner-up Shannon Babb also said he struggled with power steering issues the longer the 40-lapper went on. His team double-checked the power steering system and lubed the steering rack, hoping things are better Saturday. ... Wendell Wallace brought out a backup No. 88, a car he last ran Memorial Day weekend at Tri-City Speedway in Granite City, Ill. ... Jeep Van Wormer, who suffer heavy damage to the right front of his car in the same wreck with Johnson, worked with his crew until 4 a.m. making repairs. Is it fixed? “We’ll know tonight,” he said. Van Wormer posted a solid qualifying lap, fourth best in his group.