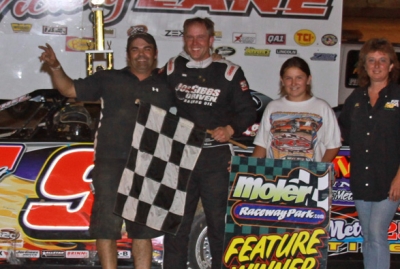 The runner-up Whitney, of Middletown, Ohio, was chased to the checkers by track champion Barry Doss of Sardinia, Ohio, who started inside the eighth row. Former ALMS champion Brian Ruhlman of Clarklake, Mich., and 11th-starting Dusty Moore of Swanton, Ohio rounded out the top five.

Notes: Roberts is sponsored by K&M Recycling, SMR Inc. and Roberts Auto Enterprises. ... Roberts, who stepped away from racing for several years until beginning to run part time again in '07, last won on the ALMS tour on Sept. 1, 2001, at Oakshade Raceway in Wauseon, Ohio. ... The series heads to Oakshade on Saturday for a $2,000-to-win event.