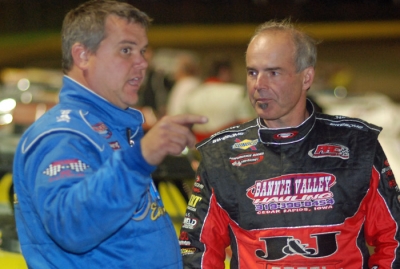 “We were just talking about our car setups and stuff back and forth a little bit,” Moyer said, "and he said, ‘If you get up there to me, my weak spot is right over there (in turn two).’ ” | Complete Summernationals coverage

Sure enough, the red-hot Moyer cut Babb’s quarter-track lead to nothing over a 15-lap stretch, then made the winning pass exiting turn two with six laps remaining and cruised the rest of the way. The 52-year-old Hall of Famer from Batesville, Ark., earned $5,000 and stayed perfect on the Summernationals with his third straight victory following triumphs Wednesday in Brownstown, Ind., and Thursday in Kankakee, Ill.

Moyer, the all-time winningest Summernationals driver with 75 career victories, posted his seventh winning streak of three or more series races and is halfway to matching his 1994 record of winning the first six series events.

Cedar Lake hadn’t hosted a Summernationals event in 14 years, and it had been even longer (16 years) since Moyer won at the 3/8-mile oval where he piled up big victories in the late 1980s and early ‘90s.

“We have been on a dry spell up here. We used to have a pretty good handle on it, and it kind of got away from us,” said Moyer, a five-time USA Nationals winner at Cedar Lake. "That’s why we came back up here right now. We’ve been working on this new car, and I think we’ve got everything going our way right now.”

Babb, of Moweaqua, Ill., started outside the front row and outjumped polesitter Eric Pember of Pittsville, Wis., at the outset, building a full straightaway lead by the 15th lap while Pember had his hands full with Moyer and Matt Miller of Waterville, Ohio. By the time Moyer worked past Pember, Babb had a quarter-track margin.

“When I first got into second there, I couldn’t even see him,” said Moyer, who has won eight of his last 10 starts overall, including the $100,000-to-win Dream XVI on June 13 at Ohio’s Eldora Speedway. "I knew the car felt real good, and I kept clicking off laps, and I could see him up there and started coming to him.”

“My weak spot was off of (turn) two, and he went by me like I was standing still,” Babb said.

Lapped traffic late in the race gave Babb a chance to answer Moyer, but he couldn’t mount a challenge in settling for second.

“Billy obviously has been on a roll,” said Miller, who swapped the third spot with Moyer early in the main event on a high-speed track. "His car worked really well in those kind of conditions, and Shannon’s he’s grown up on that stuff. I knew when we started off Shannon was going to be tough to beat where he was at. Then when I saw (Moyer) get under me, it was going to be tough to hold him off.”

Moyer has 12 victories overall and is dominating the grueling Summernationals tour, which is scheduled to run 19 days in a row and 29 races overall through July 17,

“It’s been phenomenal,” Moyer said of his standout season. “We’ve worked real hard. We keep tweaking on little things, just getting a little bit better and a little bit better, ever since we came out with the car in January out there in Tucson.”

The race was slowed once for a first-lap caution that turned into a red flag after a tangle down the backstretch that sent sixth-starting Adam Hensel into the backstretch wall. The slowing Hensel collected Zach Johnson with Bub McCool, Jeep Van Wormer and Dennis Erb Jr. getting a piece of the action. Johnson’s car received the most damage after sliding underneath before the cars came to a rest on the high side entrance to turn three.

Polesitter Brian Birkhofer led all the way to take the B-Main while fifth-starting Jeep Van Wormer's quick start moved him into the runner-up slot on the first lap. The two finished in the top two spots to transfer to the main event. Ryan Unzicker finished third in a 12-lap race slowed by single lap-seven caution for a slowing Jason McBride, who started outside the second row. Billy Moyer Jr. failed to transfer, but he got a series provisional for the main event. Dennis Erb Jr. got the UMP points provisional based on '09 weekly points and Mike Nutzmann got the track provisional.

The lineup for the B-Main. The last row is made up of C-Main winners Pete Parker and Chad Simpson (the top two finishers from the B-Main transfer to the main event):

In the redraw among heat winner, Eric Pember drew the pole position. Shannon Babb will start alongside in row one with Pat Doar and Matt Miller in row two for the 40-lapper.

Polesitter Shannon Babb, sliding high in turn two on the first lap, turned back Billy Moyer's groove-switching move on the backstretch and kept Moyer at bay the rest of the 10-lapper. Babb had a half-straightaway lead after five laps and the top two pulled far ahead of the field. Fifth-starting Jack Sullivan took third from Jason McBride at the halfway point, and McBride held fourth until the final lap, when Bub McCool pulled alongside. They rubbed heading to the checkers with McCool getting the final transfer spot by a nose. Last-row starters Dennis Erb Jr. (flat tire in qualifying) and Wendell Wallace (jumped cushion in qualifying) couldn't make up much ground. Fourth-starting Ron Klein pulled to the infield with a flat left-rear tire on the sixth lap.

Polesitter Matt Miller had a perfect start, leaving a three-wide battle behind him on the first lap and edged away for the victory. Fifth-starting Will Vaught made the low groove work, getting under third-starting Brady Smith on the first lap while outside front-row starter Brandon Sheppard tried to hang on in the outside groove. With Miller comfortably out front, Smith fought off Vaught's low-side challenges and Sheppard recovered from early struggles to regain third from Vaught on the seventh lap. Vaught, who ran as high as second, got the fourth and final transfer spot, moving to a higher line the final laps. Ryan Unzicker was fifth, eighth lengths behind Vaught.

Outside front-row starter Eric Pember got the first-lap jump on polesitter Adam Hensel to win a battle among the all-Wisconsin front row. Hensel never seriously challenged Pember while second-row starters Keith Foss and Zach Johnson got the other two transfer spots with the top four running exclusively in the high groove. Mike Fryer spun inside turn two to draw a lap-two caution. Tail-starting Jason Utter pulled to the pits during the lap-two caution.

Polesitter Pat Doar fought off a high-side challenge from fellow front-row starter Jason Feger at the outset and cruised to an easy victory in the caution-free 10-lapper. Doar built a straightaway lead erased by a lap-five caution for Bryan Wennen's turn-two spin. Doar resumed his domination on the restart and raced to victory over Feger while fourth-starting Chris Simpson, who battle Jimmy Mars early, was third ahead of Mars, the last of four drivers transferring to the main event. Brian Birkhofer was fifth.

Hometown driver Pat Doar blazed to 13.131-second lap at Cedar Lake Speedway’s 3/8-mile oval on Friday to set fast time for the third round of the UMP DIRTcar Summernationals. Doar, the fastest of 43 qualifiers, will start on the pole of the first of four heat races in Friday’s action, which will be capped by a $5,000-to-win main event.

Other heat race winners at the Masters weekend Late Model opener following group qualifying: Adam Hensel of Barron, Wis.; Matt Miller of Waterville, Ohio; and Shannon Babb of Moweaqua, Ill. The top four finishers of four heats transfer to the main event, along with two drivers from the B-Main and three provisional starters.

The Summernationals return to Cedar Lake for the first time since 1996 with a Friday-Saturday doubleheader as the Wisconsin oval becomes the first track since 1998 to host back-to-back series events. Saturday’s event pays $10,000 to the winner.

Dennis Erb Jr. didn’t get a qualifying time after having a flat left-rear tire. ... Wendell Wallace got too high in turn two on his qualifying lap, losing a few seconds. ... Cedar Lake has hosted Summernationals events in 1993 (winner Scott Bloomquist), ’94 (Billy Moyer) and ’96 (Jimmy Mars). ... West Plains (Mo.) Motor Speedway hosted consecutive Summernationals events in ’98. ... Wendell Wallace’s crew made repairs on a broken power steering hose that forced him off the track in last night’s B-Main at Kankakee. ... Jack Sullivan’s team made repairs on an engine that was souring in the final laps of his fourth-place finish at Kankakee. ... Richie Hedrick, who has piloted a No. jp7 purchased from Mike Petersak in the first two events, is driving his regular No. 0. ... Brandon Sheppard is debuting a new white Pierce Race Car. ... Adam Hensel is debuting a Rocket Chassis out of the shop of Kentucky-based Tim Logan Racing as is Lance Matthees. ... Nineteen drivers have entered all three Summernationals events so far. ... The UMP tire rule allows Hoosier LM-20s, 30s and 40s, but because Cedar Lake regulars use Hoosier WRS 55s and WISSOTA 55s, those tires (comparable to the LM-40) are legal this weekend.