Moyer slips under foes for victory at Kankakee 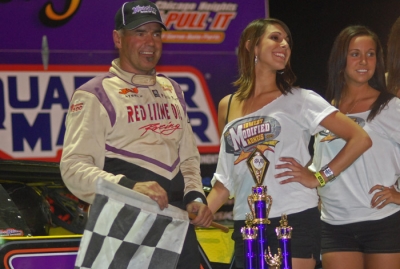 The third-starting Moyer held that position midway of the 40-lapper feature, but he found traction lower on the track that allowed him to slip by second-running Jason Feger of Bloomington, Ill. He went by Feger on the backstretch on the 22nd lap, then duplicated the move exiting turn two on the 24th lap to get past race-long leader Frank Heckenast Jr. of Orland Park, Ill.

Feger took second from Heckenast on lap 28, but by then Moyer was a straightaway ahead and cruising toward a $5,000 victory. Feger cut the lead in half when Moyer was slowed by traffic, but he was never in danger of losing the lead or his hot streak.

“He’s better than everybody right now, I think,” said the runner-up Feger, who scored his best series finish since running second last July 10 in Waynesfield, Ohio. “There’s no stopping him. I don’t know, that guy’s just on a roll.”

Heckenast, aiming for his first-ever series finish, settled for third at the third-mile oval south of Chicago.

“Before that (lap-18) caution came out, I thought we were in pretty good shape,” Heckenast said. “I knew he was close and I knew he’d be coming. The streak he’s on, it’d be hard to keep him behind us.”

Jack Sullivan of Greenbrier, Ark., who believed a broken valve spring might’ve been the cause of his engine problems in the final laps, nursed his car home in fourth for his second straight top-five finish on the series, and Shannon Babb of Moweaqua, Ill., rounded out the top five.

The race’s lone caution appeared on the 18th lap when Bub McCool got into the turn-four wall, and Brian Shirley pulled off during the caution after dumping fluids on the track.

Polesitter Brian Shirley led all the way to earn a starting spot in the main event. Ted Loomis, Brandon Sheppard and Jason Jameson had a tight battle for the second spot throught the first half of the race, with Jameson eventually dropping back. Loomis slipped up midway through the race, and Sheppard cruised the rest of the way for the final transfer spot. Jameson was third. Provisionals still must be set and the redraw for the main event will be done on the frontstretch just prior to the feature.

Polesitter Frank Heckenast surged into the lead when Mike Provenzano got hung up on the turn-four cushion on the first lap, then edged away for a victory. Third-starting Tanner English and sixth-starting Rodney Melvin briefly challenges Heckenast before he pulled away to an easy victory. Melvin's low groove led to a runner-up finish with a higher-running English in third. Provenzano, who started outside the front row, was fourth but slipped back two more spots late in the race and pulled off before the finish. Rusty Schlenk got the final transfer spot.

Billy Moyer's first-lap momentum on the outside carried him into the lead over polesitter Shannon Babb, and Moyer cruised the rest of the way in the 10-lapper. Only Babb could remotely keep up with Moyer while Frank Heckenast Sr. edged away from a group of challenges for the third spot. Mark Voigt got the fourth and final transfer spot, fighting off Ted Loomis and Derek Chandler in the caution-free affair.

Polesitter Jack Sullivan held off challenges from third-starting Matt Miller throughout the race for a 10-lap victory in the caution-free prelim. Miller was a solid second with fourth-starting Dennis Erb Jr. in third. Billy Moyer Jr. worked the low groove early and moved up later after securing the fourth and final transfer spot. Front-row starter Brandon Sheppard faded to fifth. Steve Dimmick spun out of turn four on the final lap with Steve Thorsten narrowly missing a major accident.

Polesitter Jason Feger outdueled fellow front-row starter Ryan Unzicker on the first lap and cruised to victory. Unzicker finished a straightaway behind in second while Bub McCool, who pinched Jeep Van Wormer into the frontstretch wall early, was further back in third. Van Wormer held on for the fourth and final transfer spot. A first-lap accident involved several cars when fifth-starting Brian Shirley got sideways between turns three and four, collecting Donny Walden Jay Morris, Richie Hedrick and Kevin Weaver in an accordion-like stackup; everyone was able to continue. The first start was called back and Dillan White pulled off the track.

Jason Feger of Bloomington, Ill., topped 48 qualifiers Thursday night at Kankakee County Speedway for the second round of the UMP DIRTcar Summernationals. Feger’s lap of 14.133 seconds puts him on the pole of the first of four heat races at the third-mile oval.

Four heat races will send four cars apiece to the feature event. Two C-Mains and a B-Main, with two drivers apiece transferring to the feature, are also scheduled. The night’s 40-lap feature pays $5,000 to the winner.

Kevin Weaver of Gibson City, Ill., slipped over the turn-one banking and didn’t get a qualifying time. ... Richie Hedrick had a flat left-rear tire on his lap. ... Charley Hess pulled off the track in hot laps and didn’t come out for time trials. ... Jason McBride got hung up on the turn-one cushion, slowing his qualifying lap. ... Russ Adams spun in turn two on his lap. ... The track’s scoreboard was zapped by lightning two weeks ago but has already been repaired. ... Kankakee plans a six-car dash to set its provisional starting spot. ... UMP weekly and tour provisionals are also part of the 21-car starting field. ... Modifieds are the only other division in action with about 50 entries; the track is also running a $1,500-to-win modified special on Friday, its regular night of racing. ... Officials reversed the seventh- and eighth-place finishers from Brownstown’s opener, giving Dennis Erb Jr. a seventh-place finish and Jason Jameson eighth. ... Thirty of 48 entries competed Wednesday at Brownstown.