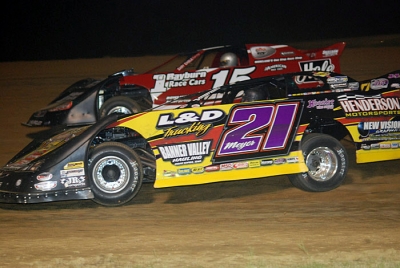 BROWNSTOWN, Ind. (June 16) — As the saying goes, if you can’t beat ‘em join ‘em. Billy Moyer’s version, on a night with ripply track conditions at Brownstown Speedway, was if you can’t miss the rough spots, use ‘em to your advantage.

The 52-year-old Hall of Fame driver from Batesville, Ark., did just that at Wednesday night’s opening event on the UMP DIRTcar Summernationals circuit, propelling his No. 21 Victory Circle Chassis through rough spots to victory in the 40-lap feature for his series-leading 73rd career victory on the grueling tour. | Complete Summernationals coverage

Moyer, who slipped under race-long leader Mike Marlar of Winfield, Tenn., exiting turn two on the 27th lap, earned $5,000 for his Hoosier Dirt Classic victory, another in a long stretch of Brownstown victories and his first since March 2007 at the quarter-mile fairgrounds oval in southern Indiana.

The third-starting Moyer chased the polesitting Marlar in the early laps before dropping back to third behind outside front-row starter Greg Johnson of Bedford, Ind., following a lap-six restart. As the frontrunners maneuvered in and around the bumps and holes that lifted several cars off the ground, Moyer found a faster line near the race’s midpoint.

“We were just trying to hit the holes just right down there,” Moyer said. "It seemed like the (21st) lap I got by (Johnson), I kind of found a little something. If I hit that hole just right with the left-rear tire, I could kind of get a little bit of traction right there. So that kind of helped us get up beside him, then we kind of ran Mike down there a little bit, and I kind of tried to do the same thing when we caught him.”

Marlar slipped high coming out of turn two and Moyer zipped by on the backstretch, never to be challenged again in winning by a half-straightaway in front of a healthy midweek crowd.

“When I got the lead, I kind of changed my line and started running a little bit different, and even then it seemed better yet,” Moyer said. "These old cars are just funny. When you’re in the lead, things happen a lot better than when you’re behind cars.”

Marlar, who was a late arrival after restoring a swingarm rear suspension to his car in the 24 hours before the event, said his tires gave up in second half of the race on a track buffeted by rains in recent days.

“I could maneuver the holes really good early in the deal, and then when I got loose ... when that happened, I couldn’t maneuver the holes like I wanted to,” said Marlar, who struggled to get the right angles going from the straightaways into the corners. “That’s when things went downhill for me and he was able to pass me.”

Fourth-starting Jack Sullivan of Greenbrier, Ark., took third from Johnson just after Moyer’s winning pass while Johnson ended up fourth, the best among home-state drivers. Jeep Van Wormer of Pinconning, Mich., last year’s Summernationals winner at Brownstown, improved from eighth to fifth and was the only driver among the top 10 in last year’s series points to crack the top five.

Two cautions slowed the action, first for Weaver’s turn-two spin on the sixth lap that collected Shirley. The final caution appeared on lap 36 when eighth-running Rusty Schlenk of Jackson, Mich., departed and officials discovered debris on the backstretch.

Moyer is a six-time Summernationals champion and the winningest all-time driver, but he says he’ll let his son Billy Moyer Jr. take a crack at the series this year while he enters selected events.

“We’re going to run these first few of ‘em,” Moyer said, “and then we’ll have to go home and rebuild after tracks like that tonight.”

Fifth-starting Dennis Erb Jr. won a lengthy side-by-side duel with third-starting Kevin Weaver, edging ahead on the eighth lap in his outside groove for a 12-lap victory. The low-running Weaver settled for second while polesitter Joe Janowski ran a solid third behind the frontrunners. Billy Moyer Jr., Brian Shirley and Shannon Babb got the other three transfer spots in a race that sent six cars to the main event. Ryan Unzicker wasn't in contention but transfers to the main event with a provisional along with Jason Feger.

Brandon Thirlby won the first C-Main, holding off Marty O’Neal in a caution-plagued consy. In the second caution-free C-Main, tail-starting Michael Chilton rallied to overtake polesitter Jason Feger in the closing laps. Chilton used the high side to catch the low-running Feger, who will start the main event with a provisional. Thirlby and Chilton start on the tail of the B-Main. The B-Main lineup (top six finishers advance to feature):

Chad Stapleton broke a rear end in hot laps and missing qualifying, but he made repairs for the C-Main. ... Polesitter Mike Marlar joked that he’s running out of clean clothes on his long racing trip, wearing the same socks he wore over the weekend at Eldora Speedway for Dream XVI. “I don’t even have to press the gas,” Marlar cracked. “The accelerator runs away from my foot.” ... Jack Sullivan, who won his first-ever visit to Brownstown despite missing hot laps, decided to practice this time. “That might’ve jinxed me,” Sullivan said. Apparently not as the GRT house car driver won a heat race. ... Matt Miller broke a fuel pump belt in his heat race while running third. “That monkey is still back there,” he said, reaching for his back. ... Rodney Melvin broke a driveshaft before taking the green as a polesitting of his heat race. “I’m getting ready to get some spray paint,” he said, gesturing toward the green car. Many racers consider green to be bad luck. ... Jason Jameson and Dennis Erb Jr. had differing views about who caused their postrace collision heading into turn one following their heat race. Both drivers thought the other didn’t know the race was over; Erb thought Jameson drifted high, while Jameson thought Erb came down. Erb’s car suffered nosepiece damage and Jameson’s right-rear tire was flattened, but neither driver's feelings seemed to be hurt. “That’s part of racing,” Jameson said. “Things like that are going to happen.” ... Two-time NASCAR Sprint Cup champion Tony Stewart is racing on dirt for the second consecutive Wednesday. He’s running his No. 14 modified under the name “Smoke Johnson."

Outside front-row starter Scott James worked the high side all race long for a victory while polesitter Wendell Wallace, who fought off race-long challenges from Billy Moyer Jr., got the second and final transfer spot. Moyer took one final shot at Wallace out of turn four, running wide of the frontstretch but falling a car length short.

Third-starting Greg Johnson slid under polesitter Dennis Erb Jr. early and edged away for a victory in a race with an exciting duel for the second and final transfer spot. Erb and the fourth-starting Babb battled for second through the middle stages, and all the while outside front-row starter Jason Jameson worked the low groove. Jameson got past Babb on the white flag lap and beat Erb into turn three, edging Erb at the checkers. Babb ended up fourth. Erb, Babb and Jameson appeared to tangle between turns one and two, apparently incidental contact; Jameson rolled to the pits with a flat right rear.

Outside front-row starter Jack Sullivan edged ahead on the high side on the first lap and pulled away for a victory. Fourth-starting Eric Wells escaped a wild, turn-two battle among five cars on the second lap to get and hold the runner-up spot. Steve Barnett was third just ahead of seventh-starting Tim Tungate and Tanner English, who inherited the pole. Polesitter Rodney Melvin's car lost fire on pace laps and he was pushed to the infield.

Polesitter Billy Moyer went to the high side after a lap-two restart and swept around early leader Bub McCool, who took the lead at the outset from his outside front row starting spot. Moyer cruised the rest of the way while McCool wasn't challenged in hanging on to the second and final transfer spot. Kevin Weaver edged Jeremy Hines for third. Matt Miller was running third when he slowed on the sixth lap and drew a caution when he rolled to a stop trying to exit the track in turn one. Richie Hedrick spun between turns one and two to draw a lap-three caution, then dropped out on the final lap.

Polesitter Dillan White beat fellow front-row starter Jeep Van Wormer out of turn two on the first lap and pulled away for an easy victory. White, a winner in Brownstown's weekly action this spring, won by a full straightaway over Van Wormer, who got the second and final transfer spot over fourth-starting Brian Shirley. Everyone else was at least a half-track behind White. Three starts were required to get the heat rolling. The first start was called back and the second had a caution when Lee Thomason spun exiting turn two.

On a track reworked just before the heats, fast qualifier and polesitter Mike Marlar led all 10 laps for a victory, taking the checkers a half-straightaway ahead of fourth-starting Rusty Schlenk. Only two cars transfer to the main event. Outside front-row starter Joe Janowski stayed with Schlenk most of the way, finishing a car length back in third. The lone caution appeared on the second lap when tail-running Marty O’Neal stopped in turn two.

The first qualifier on a tricky track, Mike Marlar of Winfield, Tenn., was fastest among 50 entrants in time trials Wednesday at Brownstown Speedway’s UMP DIRTcar Summernationals opener. Marlar posted a lap of 14.845 seconds on the quarter-mile oval, the only driver under 15 seconds and one of only a few below the 16-second mark.

Marlar will start on pole of the first heat after setting fast time on the drying oval that developed a few rough spots during qualifying. Track officials plan to rework the surface before the heat races begin.

The top two finishers of each of six heats transfer to the main event; finishers 3-5 go to the B-Main and everyone else goes to one of two C-mains. The winner of each C-Main transfers to the last row of the B-Main and the B-Main sends six cars to the Hoosier Dirt Classic feature, which pays $5,000 to the winner.

The race is the first of 29 events through July 17 that winds through seven states. ... Three provisionals round out the 21-car starting field, one for the top in series points from ’09, top in UMP weekly points from ’09 and one from the track. ... The track is deciding its provisional with a dash among six drivers. ... Rusty Schlenk enters the event with nearly a 500-point lead in UMP weekly points. ... Richie Hedrick of Urbana, Ill., is driving a No. jp7 he bought last month from Mike Petersak.