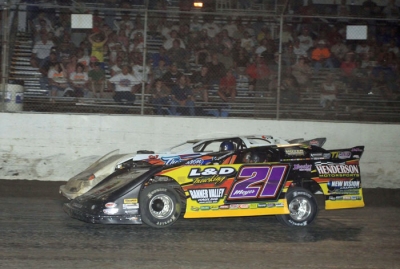 PEVELY, Mo. (June 5) — Hall of Famer Billy Moyer of Batesville, Ark., took the lead from polesitter Dennis Erb Jr. of Carpentersville, Ill., on the 11th lap and led the rest of the way in the 40-lap Tri-State Challenge feature at I-55 Raceway. The Northern Allstars Late Model Series victory paid the fourth-starting Moyer $5,000. | Slideshow

Fifth-starting Will Vaught of Crane, Mo., the previous night’s Tri-State Challenge winner in Paducah, Ky., took a shot at Moyer on a two-lap shootout to the finish but settled for second. Billy Moyer Jr. rallied from 10th to finish third while Erb and Billy Faust of Lebanon, Ill. rounded out the top five.

Bub McCool of Vicksburg, Miss., started outside the front row and ended up sixth, while third-row starter Shannon Babb of Moweaqua, Ill., was running fourth in the closing laps when he rolled to a stop with engine problems on lap 38.

The only other caution appeared on the 15th lap when Ron McQuerry got turned around in turn three after contact with the leading Moyer.