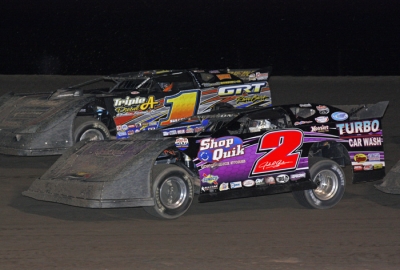 JETMORE, Kan. (June 4-5) — John Anderson of Omaha, Neb., grabbed one of the biggest victories of his career Saturday at the Great American Dirt Track, earning $10,000 for capturing the 50-lap Sunflower State Showdown.

The sixth-starting Anderson overtook polesitter Eric Turner of Springfield, Mo., on a late-race restart and led the final four laps of the race sanctioned by the MARS DIRTcar Series, O’Reilly NCRA and the Colorado Late Model Association DIRTcar Series. | Prelims

Jack Sullivan of Greenbrier, Ark., led most of the race and appeared to be headed for victory when his engine blew on the frontstretch with just six laps remaining.

Turner, Payne and Sullivan took turns leading the first three laps with Sullivan in control over Anderson, Turner, Kirchoff and Kelly Boen at a lap-21 caution for Darrell Mooneyham. After a lap-26 caution for Bill Koons, Turner took the lead from Sullivan on the restart, but Sullivan edged back ahead on lap 35 and quickly built a straightaway lead.

Sullivan was on cruise control when his engine gave up on lap 44, and that handed the lead back to Turner with Anderson, Boen, Phillips and Kirchoff in pursuit. But on lap 46, Boen and Anderson made contact in turn one, sending Boen spinning. The front-end damage to Boen's Terry Pannell-owned car prevented him from continuing.

So on the seventh and final restart of the race, Turner led the field to green. But when he dove to the bottom in turns one and two, Anderson used the high line to zip past and make the winning pass on lap 47.