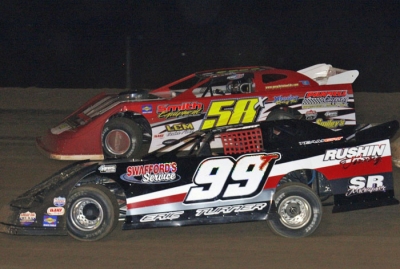 MONETT, Mo. (May 30) — Five-time and defending MARS DIRTcar Series champion Terry Phillips of Springfield, Mo., led all 35 laps from outside the front row at Monett Speedway to capture the 10th annual Tony Roper Memorial. Phillips collected $3,000 for his second victory of the season and 69th of his career. | Slideshow

Series points leader Eric Turner of Springfield started 12th and raced his way into second by the 27th lap, but he couldn't catch Phillips and settled for second while fifth-starting Jeremy Payne of Springfield was third. Jack Sullivan of Greenbrier, Ark., who gave up the second spot to Payne on the 26th lap, ended up fourth and Tony Jackson Jr. of Lebanon, Mo., rounded out the top five.

Five-time MARS champ Bill Frye of Greenbrier, Ark., was running sixth when he slowed between turns three and four with an apparent flat tire and Shane Essary of Aurora, Mo., clipped the rear of Frye's car, ending the night for both drivers.

Notes: Phillips drives a GRT Race Car powered by a Hatfield engine and sponsored by Andy's Frozen Custard, Don Babb Motorsports and New Vision Graphics. ... Phillips has eight of his 69 career MARS victories at Monett. ... Tony Jackson Jr. drove the No. 42 of MARS regular Brandon McCormick of Lebanon, Mo., who has been out of action since suffering a broken blood vessel in his brain in mid-March. McCormick feels fine but hasn't been by doctors to return to racing; he hopes to be back within a month or so. ... Next up for MARS is the Sunflower State Showdown at the Great American Dirt Track in Jetmore, Kan., a $10,000-to-win event co-sanctioned by O'Reilly NCRA; MARS also runs with NCRA June 6 at the Belleville (Kan.) High Banks for a $5,000-to-win event.