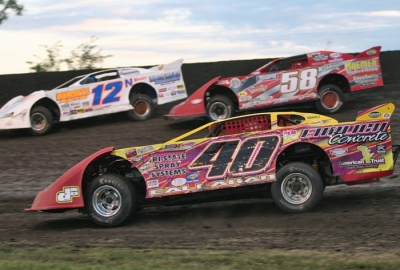 The Milan, Ill., driver cruised to the $2,000 checkers at Boone on Memorial Day while adding to his lead in the IMCA Late Model tour point standings. Terry Neal of Ely, Iowa, the driver Guss passed to win the IMCA Speedway Motors Super Nationals Labor Day event last fall, was rewarded for his Herculean effort just to get a car ready to race with a second-place finish. | Slideshow

Joel Callahan of Dubuque, Iowa, Mark Burgtorf of Quincy, Ill., and Matt Strassheim of Burlington, Iowa, rounded out the top five. The 40-lap contest was interrupted by caution just once, on the second circuit.

After a mishap in weekly action, Neal and his crew had spent the day getting a backup car ready for its first action since the series show on the asphalt at Hawkeye Downs in August 2009.

Neal started outside front row and led the first 16 laps. Guss had taken the green from outside row two and was on Neal’s back bumper for most of the early going before slipping inside for the lead.

The front pair caught up to the back of the field shortly after midway and changed lines adroitly to work their way through. Burgtorf raced his way up to second before Neal and Callahan passed him back with two laps left.

The Monday night win was the career 18th for Guss, tying him with Neal and Rob Toland for fifth on the all-time tour victory list. Provisional starter Kevin Blum made the most progress toward the front, advancing 10 places after starting 24th.