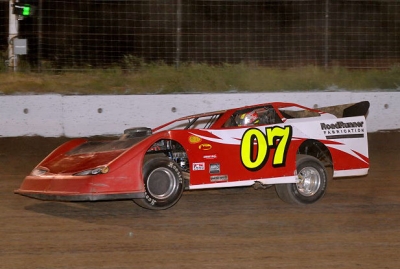 GREENWOOD, Neb. (May 30) — Kelly Boen of Henderson, Colo., led virtually the entire 40-lapper at I-80 Speedway on Sunday for a $5,000 victory in the Alphabet Soup Classic. Boen's victory was co-sanctioned by the O'Reilly National Championship Racing Association and Lucas Oil Midwest LateModel Racing Association. | Slideshow

Dave Eckrich of Oxford, Iowa, took second from Kyle Berck of Marquette, Neb., in the final laps while Brad Looney of Republic, Mo., was fourth. John Anderson of Omaha, Neb., who started on the front row with Boen, ended up fifth.

Boen edged ahead of Anderson early in the race and faced challenges from Berck as several caution periods dotted the first half of the race. But with the final 20 laps going caution-free, Boen pulled away to wrap up his first victory in the Memorial Day weekend special.