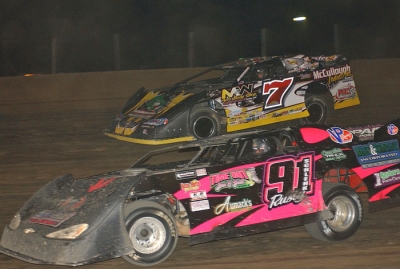 Henry led from the outset while Schlenk and the fifth-starting Miller battled for second. Miller took the second spot and caught up with Henry, taking the lead on the eighth lap.

Schlenk dropped Henry to third a few laps later and tracked down Miller. On the 20th lap, the leaders were running side by side when they came up on the slower car of Kevin Reeve, who ended up spinning after a little contact.

Miller led the restart, but Schlenk worked his was past a few laps later and raced to victory in a battle of Oakshade champions.