Moyer leads all the way at Tri-City's FedEx 50 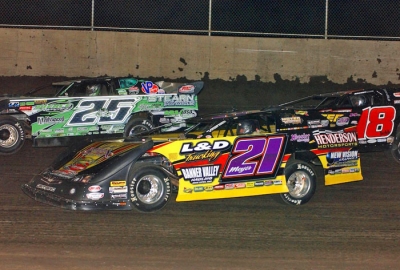 GRANITE CITY, Ill. (May 30) — Polesitter Billy Moyer of Batesville, Ark., led all the way Tri-City's FedEx 50 on Sunday night for a UMP DIRTcar-sanctioned victory worth $10,000. Moyer got the jump on fellow front-row starter Jason Feger of Bloomington, Ill., and never looked back in racing to victory at the 3/8-mile oval promoted by Kevin and Tammy Gundaker. | Slideshow | Video

"That's what Kevin said down there in victory lane, he said it looked too easy, like I was out there on a Sunday afternoon cruise," Moyer said. "The car was pretty good. It could always be better. ... but it was better than everybody else's."

Second-row starters Shannon Babb of Moweaqua, Ill., and Billy Moyer Jr. of Batesville futilely chased the winner to the finish while Feger and Brad Neat of Dunnville, Ky., rounded out the top five. Wendell Wallace of Batesville ran as high as third but ended up 12th.

Cautions appeared for a slowing Craig Smith and when Eric Jacobsen, trying to take fifth from Don O'Neal, climbed O'Neal's left-rear tire entering turn three and spun out of contention.