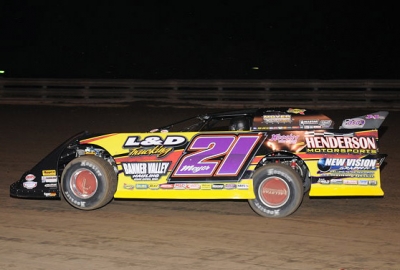 Moyer faced challenges from Will Vaught of Crane, Mo., on occasional restarts but edged away at the finish for the $3,000 victory at the half-mile oval, his first MLRA victory at Sedalia since 1990.

"The car, we hit it pretty close on the setup," the third-starting Moyer said in victory lane. "It was a little bumpy, but we survived."

The 11th-starting Vaught finished second followed by seventh-starting Chad Simpson of Mount Vernon, Iowa. Phillips, who started outside the front row, was fourth and Bryant Goldsmith of Corning, Iowa, rounded out the top five. Brad Looney of Republic, Mo., who started sixth, was running in that spot when he spun on lap 21 for one of several yellow flags. Looney ended up sixth, one spot ahead of polesitter Chris Spieker of Massena, Iowa.

Notes: Moyer's Victory Circle Chassis is sponsored by L&D Trucking, Henderson Motorsports, Banner Valley Hauling and New Vision Graphics. ... In Moyer's previous visit to Sedalia, Brian Shirley of Chatham, La., overtook him on the last lap for a UMP DIRTcar Summernationals victory June 24, 2008. ... Last year's MLRA Rookie of the Year Matt Johnson of Archie, Mo., who started fourth alongside Moyer, drew two cautions. ... Modified ace Jesse Stovall of Galena, Mo., who formerly drove for Will Vaught's car owner Paul McKenna, was back in a Late Model at Sedalia. ... The track, which has hosted only special events in recent years, is open for a weekly racing for the first time since 2003 with Jason Bodenhamer and Reid Millard promoting. ... The event drew 74 race cars overall with 39 Late Models, 19 sprint cars and 16 modifieds. ...Among Late Model drivers failing to make the feature lineup: Justin Asplin, Bryon Allison, Scott Koskovich, Zack Simmons, Eric Turner, Randy McGraw, Al Humphrey and the ageless Shorty Acker. ... The track takes a break next week for Memorial Day weekend. ... MLRA returns to Sedalia on May 21 and Aug. 22 for the fair race. ... MLRA completes its weekend Saturday at Thunder Hill Speedway in Mayetta, Kan., for another $3,000-to-win event.