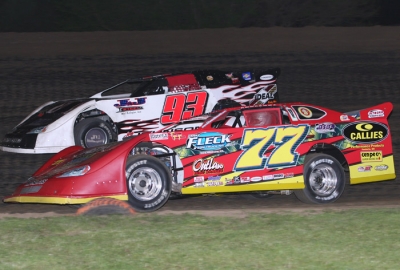 MARSHALLTOWN, Iowa (May 18) — There was plenty of passing throughout the field, but the one IMCA Late Model no one could catch was Jeff Aikey’s.

The Waterloo, Iowa, driver took the lead on the fifth of 50 laps in winning Tuesday’s Deery Brothers Summer Series feature at Marshalltown Speedway. The $2,000 victory, the series-leading 54th for the six-time and defending tour champion, came in front of fellow heavy hitters Ray Guss Jr. of Milan, Ill., and Mark Burgtorf of Quincy, Ill. Iowans Jay Johnson of West Burlington and hard charger Terry Neal of Ely, who started 19th, rounded out the top five. | Slideshow

Greg Kastli started on the pole and led the first four circuits before giving way on the high side to Aikey following the first restart of the contest. Cautions scattered throughout the race took backrunners out of play and no lapped cars were scored before Aikey took the checkers.

Guss, the series point leader, started 11th and made his way to second by midway but couldn’t mount a challenge. Burgtorf restarted at the rear following an early spin and made his way back to third. He’s now five points behind Guss in the updated standings.

The victory was Aikey’s third at Marshalltown. His first came on July 9, 1987, in the seventh event of the inaugural series season. He also won there three years ago.

Notes: Aikey is sponsored by Larry Fleck & Son Trucking and Callies Performance Products. ... Consolation winner Tyler Bruening advanced 10 positions to finish sixth. ... Darrel DeFrance had to restart at the rear early on and raced his way into the top four before a cut tire sent him to the pits. He returned to salvage 16th. ... Boone McLaughlin won the $250 Sunoco bonus. ... Next up on the Deery schedule is the traditional Memorial Day show at Boone Speedway on May 31.