Van Wormer gets back on winning track at I-96 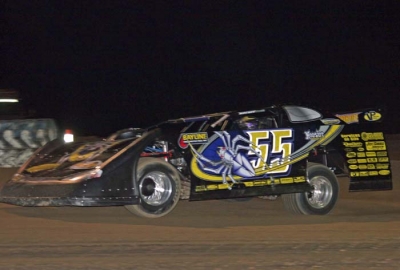 LAKE ODESSA, Mich. (May 15) — After his three-race win streak was derailed, Jeep Van Wormer of Pinconning, Mich., turned things around Saturday with a Sunoco American Late Model Series victory at the newly-shortened I-96 Speedway. The third-starting Van Wormer earned $2,000 for his second ALMS victory of the season and 26th of his career. | Slideshow

Van Wormer, who had three straight victories from April 17-23 including an ALMS victory at Eldora (Ohio) Speedway, had two sub-par performances before leading virtually the entire distance at I-96, where he won for the third time in ALMS competition.

"I feel like it's the most competitive I've been in a while, so I'm really excited about," said Van Wormer, who plans on running May 22's Lucas Oil Late Model Dirt Series event at La Salle (Ill.) Speedway. "It'll be a good judge of (how we're doing). ... I'm excited to go racing with some of the national guys and see how we rank."

Van Wormer ended up starting in the front row at I-96 after original front-row starters Carl Ries and Jerry Bowersock were both knocked out on the first attempted start. Van Wormer took control early but couldn't develop much rhythm in a scheduled 40-lapper shortened to 30 because of numerous cautions. The red flag appeared on the fifth lap for a seven-car pileup.

Van Wormer's only serious challenge came midway through the event from Eric Spangler of Lake City, Mich., who briefly slipped past Van Wormer on the backstretch on the 14th lap. But Van Wormer dove under Spangler in turn three and stayed in control.

"I whoaed up and let him go, and turned back underneath him," Van Wormer said.

Spangler ended up fifth in the race on the 3/8-mile oval, a shorter track that shares frontstretches with the track's half-mile configuration.

Notes: Van Wormer's Rocket Chassis is sponsored by Bayline Fire Protection and Globe Technologies. ... Although the ALMS event was on the 3/8-mile track, Van Wormer said the track planned to run June 29's UMP DIRTcar Summernationals event on the half-mile. ... Next up for ALMS competitors is a May 21 event at Kankakee County (Ill.) Speedway, a race co-sanctioned by the Monster Midwest Series and Northern Allstars Late Model Series.