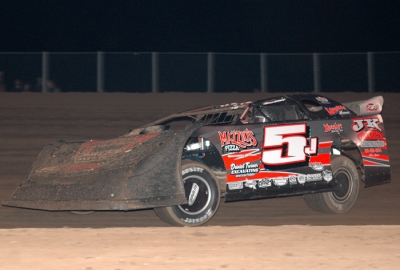 The 27-year-old Johnson, a second-year Late Model driver who was last year's MLRA Rookie of the Year, earned $1,200 for his first MDLMS victory while Wiarda settled for second after winning the previous night at Boone County Raceway in Albion, Neb. | Slideshow

Johnson jumped into the early lead with Warner, Smith and Wiarda giving chase before a lap-seven caution for Tyler Gottschalk.

After three more cautions — for Doug Sieh's spin on lap nine, and Cale Gottschalk's spin on lap 11 and when Rick Leatherman got into the frontstretch wall on the lap-11 restart — the race ran green the rest of the way.

Wiarda worked his way into second, closing the gap on Johnson when he was held up by the slower car of Earl Kinderknecht. But Johnson held on to take the checkered flag.

Notes: Johnson's GRT Race Car is sponsored by Mazzio's Pizzz, Sherwood Heating & Cooling, Daniel Turner Excavating and JK Concrete Construction. ... Johnson is a former modified champion at now-closed Adrian (Mo.) Speedway. ... Gary Gorby of Caney, Kan., leads MDLMS points. ... Kelly Dunn of Salina, Kan., pitted during a caution and rallied from the rear to finish sixth. ... MDLMS competitors next head to Mid-America Speedway in South Coffeyville, Okla., for a May 22 event; a race originally scheduled for May 21 at Thunderbird Speedway in Muskogee, Okla., was postponed to July 3. ... The series returns to Minneapolis Raceway for two more visits on Aug. 7 and Sept. 11.