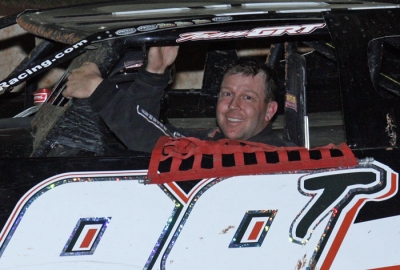 MEEKER, Okla. (May 8) — Eric Turner of Springfield, Mo., overtook polesitter Jack Sullivan on the 10th lap and dominated the rest of the Showdown in the Heartland feature at Brill Motor Speedway. Turner earned $2,500 for the event co-sanctioned by the MARS DIRTcar Series and O'Reilly National Championship Racing Association. | Slideshow

“The car was set up perfectly," said the third-starting Turner, who became the first two-time winner on the MARS circuit. "All I had to do was drive it."

Turner had a half-straightaway lead at the halfway point and cruised the rest of the 30-lap feature that was slowed only by a first-lap caution for Jase Kaser event at the 3/8-mile oval east of Oklahoma City. Sullivan, of Greenbrier, Ark., was second followed by Al Purkey of Coffeyville, Kan., Wendell Wallace of Batesville, Ark., and 13th-starting Kelly Boen of Henderson, Colo., who won the previous night's feature at Oklahoma's Creek County Speedway.

Sullivan edged into the early lead over Wallace while Turner wrestled third from Purkey on the third lap. A lap later Turner slipped past Wallace and was right on Sullivan's rear deck as the frontrunners entered lapped traffic on the ninth lap. Turner made his winning move entering turns one and two on the bottom of the track and began pulling away.

Notes: Turner's GRT Race Car has a Hatfield Racing Engine and sponsorship from Rushin Towing and Swofford's Amoco. ... Mechanical gremlins struck MARS rookie contender Gary Christian in his heat race forcing him to use a provisional and settle for a 22nd-place finish. ... The four-race Showdown in the Heartland concludes Sunday at Monett (Mo.) Speedway with a $3,000-to-win event.