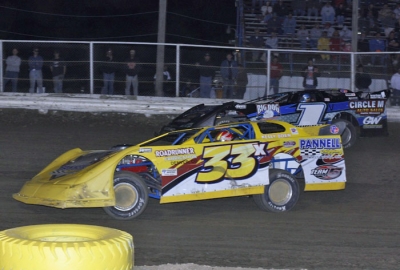 SAPULPA, Okla. (May 7) — After five-time MARS champion Terry Phillips won the Showdown in the Heartland opener at 81 Speedway, O'Reilly NCRA's five-time champion Kelly Boen fired back in Friday's Round 2 with a victory at Creek County Speedway. Boen, running as a teammate to Gary Christian in a Terry Pannell-owned car, earned $2,500 in the second of four consecutive MARS-NCRA events. | Slideshow

“I wanted real bad to get this one for Terry as I feel I have let him down these past three races,” said Boen, who notched his series-leading 45th NCRA victory but first-ever on the MARS circuit. "He was nice enough to give me a phone call over the winter to drive his car and I was glad to do it. I am available any time he is ready to race."

The polesitting Boen led all 30 laps in the first-ever Late Model race at the quarter-mile oval in northeastern Oklahoma, fending off late pressure from Will Vaught of Crane, Mo., for the victory. Jack Sullivan of Greenbrier, Ark., rallied from 11th to finish third while Eric Turner of Springfield, Mo., made a 17th-to-fourth charge. Wendell Wallace of Batesville, Ark., rounded out the top five.

Former NCRA champion Al Purkey of Coffeyville, Kan., ran second most of the way, but he got too high battling Vaught in the final laps and slipped back to finish seventh.

Four cautions slowed the action, the first for debris midway through the race and then for Ronnie Warman's spin on the restart. Dean Moore of Grand Junction, Colo., was running sixth when he slowed to bring out the fourth yellow on lap 16. Bill Koons spun in turn four on lap 27 for the final caution.