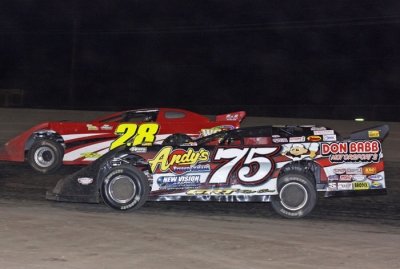 PARK CITY, Kan. (May 6) — Polesitter Terry Phillips of Springfield, Mo., led all 30 laps to capture the Showdown in the Heartland main event at 81 Speedway, the first of four straight nights of racing between competitors on the MARS DIRTcar Series and O'Reilly National Championship Racing Association. Phillips, a five-time MARS champion, earned $2,500 in outrunning Eric Turner of Springfield. | Slideshow

Wendell Wallace of Batesville, Ark., was third followed by GRT house car driver Jack Sullivan of Greenbrier, Ark., and 10th-starting Jeremy Payne of Springfield, a teammate to Phillips. Bill Koons of Omaha, Neb., started outside the front row to faded to finish 17th.

Phillips was in control all the way with Turner pressuring him just before a lap-13 caution for a spinning Zac Simmons. Phillips stretched his lead to 10 lengths on the restart, and after a few more race stoppages, held off Turner at the finish for the victory, his series-leading 68th career on the MARS circuit and 14th with NCRA.

Five cautions, one that turned into a red flag, slowed the action, the first for Kelly Boen's lap-one spin that collected several cars. Simmons spun on lap 13 between turns one and two and Darrell Mooneyham spun to draw a lap-16 yellow. On the lap-16 restart, Leroy Johnson and Brian Bolster struck an infield tire barrier in turn three, drawing the red flag when the track was blocked. Shawn Harker's lap-22 spin brought out the final caution.

Notes: Phillips drives a Hatfield-powered GRT sponsored by Andy’s Frozen Custard and Don Babb Motorsports. ... Phillips earned the pole for the feature through passing points; he started ninth in his heat and rallied to finish second. ... Runner-up Eric Turner won last year's Showdown in the Heartland event at 81. ... Adult general admission for the event? $9. ... Among drivers failing to make the feature: Delbert Smith, Corey Zeitner and Ronnie Warman. ... Next up on the Showdown in the Heartland is Friday's race at Creek County Speedway in Sapulpa, Okla., the first-ever Late Model event at the track. May 8-9 races are at Brill Motor Speedway in Meeker, Okla., and Monett (Mo.) Speedway.