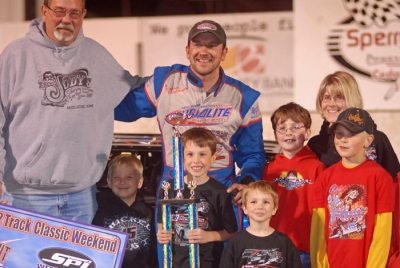 WEST LIBERTY, Iowa (May 1) — Home-track star Brian Birkhofer overtook Denny Eckrich on the 17th lap and survived a scrape with lapped traffic for a $10,000 victory in the Daufeldt Transport 50 at West Liberty Raceway. Birkhofer, of nearby Muscatine, captured the opener of the Simmons Promotions May Day weekend that wraps up Sunday at Farley Speedway. | Video | Slideshow

The fourth-starting Birkhofer battled side by side with Eckrich, the Tiffin, Iowa, driver who started outside the front row and led the first 16 laps. Once out front, he built leads as big as a full straightaway on the half-mile oval in cruising to an unsanctioned victory that wrapped up sooner than he expected.

"We were coming around and they were waving a flag, and I thought, 'Is that the checkered? Nah, it can't be.' I thought it was like lap 30 or 32 or something," Birkhofer said, laughing at himself. "It was a fun one to win."

Birkhofer's only scare came just before a lap-35 caution when he got trapped between a lapped car and the backstretch fence, making contact with the wall. The minor damage didn't cause any problems as he took the checkered flag a half-straightaway ahead of runner-up Shannon Babb of Moweaqua, Ill., who started ninth.

"I was lapping a guy and put myself in a position I shouldn't have been," Birkhofer said. "He kind of got me into the backstretch wall .... I thought I had a right-front flat, then I thought about 10 things. We got it going again and I just tried to make some good laps."

Seventh-starting Billy Moyer, an Iowa native from Batesville, Ark., finished third ahead of Terry Phillips of Springfield, Mo., who took second from Babb on lap 30 but slipped back after the restart with 15 laps remaining. Polesitter Chad Simpson of Mount Vernon, Iowa, rounded out the top five.

"Tonight when I got here, I was like, you're going to earn this one tonight," he said of the field that included champions of all sorts. "Keeping Babb and Moyer behind ya, when you see those two numbers up on the board, you've gotta keep your elbows up because one mistake and they're beside you and it's over."

Babb improved eight positions during the 50-lapper, but he knew beating Birkhofer at West Liberty was going to be difficult.

"We don't have many laps around this place, but Darren Miller as helped me out on setups over the years here, and it was really good tonight. We fired off real good.

"Once I got behind (Birkhofer), I was just following his line. He had a really good line there. I didn't have (quite) enough to run with him, but at least he didn't lap me," Babb said with a laugh.

Eckrich, who damaged his car's suspension when he hit a hole about the time Birkhofer took the lead, faded to finish 10th in his second start of the season.

"I went down in (turns) three and four and we saw the right-front A-frame got buckled a little bit," said Eckrich, who led the first 16 laps. "It hurt us, but I'm not going to make that excuse. Brian was probably going to beat us, but I think we could've held on with a top-three car, but we faded real bad at the end" because of the damage.

Notes: Birkhofer's MB Customs chassis is sponsored by J&J Steel, Hilton Head National and Daufeldt Transport, the race sponsor. ... Don O'Neal of Martinsville, Ind., made his first start for Illinois-based Moring Motorsports, filling the seat formerly occupied by Matt Miller of Waterville, Ohio. The car carried No. 1. ... Among drivers failing to make the feature: Joel Callahan, Bryant Goldsmith, Ron Boyce, Steve Boley, Denny Woodworth, Andrew McKay and brothers Kurt and Kevin Kile. ... The semi-retired Boley piloted the No. 74 of Illinois driver Russ Adams. ... The May Day weekend wraps up Sunday at Farley (Iowa) Speedway with another $10,000-to-win event. That race was rained out Friday and rescheduled.