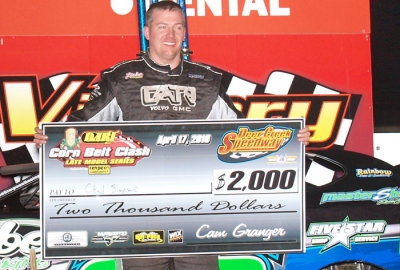 The 31-year-old Simpson, the two-time World Dirt Racing League champ who is looking for a new home after WDRL folded in the off-season, raced to victory in his third start of 2010.| Profile of rookie driver Kevin Sather | Slideshow

Simpson's younger brother, Chris, started alongside him on the front row but fell back to fifth on the first lap and finished seventh.

The only caution appeared on the first lap for a three-car pileup that required a restart.