Heat is on at Eldora, but Jeep cool enough to win 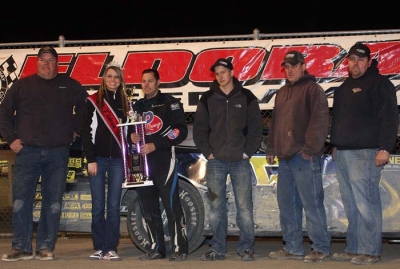 ROSSBURG, Ohio (April 17) — Outside front-row starter Jeep Van Wormer of Pinconning, Mich., raced to a 25-lap victory at Eldora Speedway on Saturday for his 25th career victory on the Sunoco American Late Model Series. Van Wormer earned $2,000 for the victory on a chilly night at the historic half-mile oval.

Keeping his competition at a distance most of the race, Van Wormer's biggest scare came from a potentially overheating engine. Something poked a hold in his car's radiator early in the race, and for the rest of the way, he kept one eye on the track and one on his temperature gauge.

Van Wormer eased up late in the race to guarantee his victory over third-starting Matt Miller of Waterville, Ohio, who made a late charge to cut into Van Wormer's lead.

Two-time ALMS champion Rusty Schlenk of Jackson, Mich., rallied from his ninth starting spot to finish third with Steve Casebolt of Richmond, Ind., and polesitter Wayne Chinn of nearby Bradford, Ohio, rounding out the top five.

Chinn held the second spot through the first half of the race before Miller slipped underneath to take the runner-up role.

The race was slowed by a single caution on the second lap when Tim Sabo, Scott Orr and Phil Ausra got together back in the pack.

Notes: Van Wormer's Iron Motorsports Rocket Chassis is sponsored by Bayline Fire Protection and Globe Technologies. ... The victory was Van Wormer's first of 2010, but he quickly followed it Sunday with a victory at Waynesfield (Ohio) Motorsports Park. ... His previous ALMS victory came last April at Eldora. ... Among drivers failing to make the feature: Curtis Roberts and Brad Eitniear. ... Jeff Babcock, 11th in the Late Model feature, won the modified main. ... Next up for ALMS competitors is a May 7-8 weekend at Limaland Motorsports Park near Lima, Ohio, and Fremont (Ohio) Speedway.