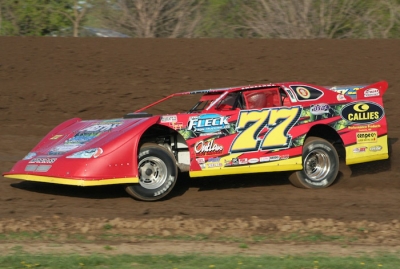 MAQUOKETA, Iowa (April 17) — It took seven laps for Jeff Aikey to get to the front of the Deery Brothers Summer Series feature field at Jackson County Speedway. Once he got there, the rest of the IMCA Late Model touring event was for second.

Aikey, of Waterloo, Iowa, caught Jay Johnson of West Burlington, Iowa, and led the last 43 times around the track Saturday night, passing half the pack before his big lead was erased by a caution with 13 laps to go. He checked out again following the restart, taking the checkers comfortably ahead of 18th-starting Terry Neal of Ely, Iowa.

Notes: Aikey's No. 77 is sponsored by Callie's and Outlaw Brakes. ... Tyler Bruening pocketed the $250 Sunoco bonus. ... Ray Guss Jr. rallied from 16th to finish third. ... The 49 Late Model entries made for a Deery track record at Jackson County, topping 42-car counts for events in 2004 and again in 2006. ... Forty-nine entries on Saturday also pushed the total to 12,816 for the 356 series events held since 1987. That pencils out to an average of 36 cars a night. ... The series wraps up an Iowa tripleheader Sunday with its first-ever visit to Dubuque Fairgrounds Speedway.