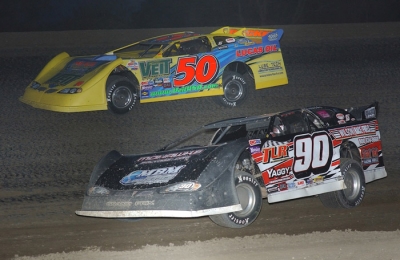 ALEXANDRIA, Minn. (April 16-17) — The weather-postponed Viking Fall Classic was held in the springtime, but as any Viking Speedway fan knows, Jeff Wildung is liable to show up in victory lane no matter the season.

Paul Mueller and Shawn Kirwin started on the front row of the 40-lapper with Kirwin leading the first lap as the fourth-starting Johnson quickly took second. Matthees, who started 11th, also quickly moved into contention.

Johnson blasted by Kirwin on the low side to grab the lead on the ninth lap exiting turn two to take command while the low-running Matthees slipped past Weiss and Pat Doar a few laps later to grab third.

Matthees took second from Kirwin before the halfway point while Wildung began his surge to the front in his familiar yellow No. 50. The high-running Wildung began to track down the frontrunners, who were glued to the inside groove.

A lap-28 yellow bunched the field and Matthees was out front as Wildung took the second spot from Johnson the restart. A side-by-side duel between Matthees and Wildung commenced with Wildung edging ahead with eight laps remaining.

Johnson slipped by Matthees in the final laps for a last-ditch charge of Wildung, but Wildung stayed in control the rest of the way to win his first start of the season.