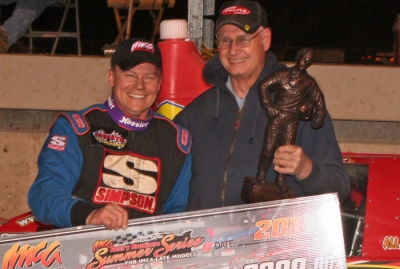 Guss earned $2,000 for his first victory of the season on the IMCA Late Model tour and took over the top spot in the early series point standings. Mark Burgtorf of Quincy, Ill., had come to town looking for his third win in as many 2010 events, but broke shortly after relinquishing the lead to Guss before midway and was relegated to 18th. | Slideshow

The 50-lapper started with Burgtorf taking the green from the outside of row one. He ran at the front with pressure eventually coming from the sixth starting Guss and the eighth-starting Jason Rauen.

Frequent yellows slowed the contest, two casualties being Rauen and Burgtorf. Guss had finally caught up and was first across the line on lap 22, then Burgtorf broke half a lap later and coasted to a stop on the backstretch.

The race ran without caution from that point and Guss checked out on everybody, winning his 17th Deery feature and his first at Davenport since 1999. The real fight was for second and Eckrich eventually prevailed in a tussle that frequently saw four or five cars challenging for the spot.

Notes: Guss drove a Hershel Roberts-owned MasterSbilt Race Car is powered by a Mullins Engine and sponsored by Sears Seating, Roberts Custom Software and Roemer Machine & Welding. ... Mark Burgtorf was trying to become the first series driver since 2004 to win three straight events. ... Darrel DeFrance of Marshalltown, Iowa, ran sixth in his 355th consecutive career series outing; he's third in the standings, seven points behind Guss and one back of Burgtorf. ... Brett Diercks was the $250 Sunoco drawing winner. ... The series tripleheader weekend continues in Iowa with a Saturday event at Jackson County Speedway in Maquoketa and a Sunday race at Dubuque Fairgrounds Speedway, the first-ever Deery Brothers race at that track.