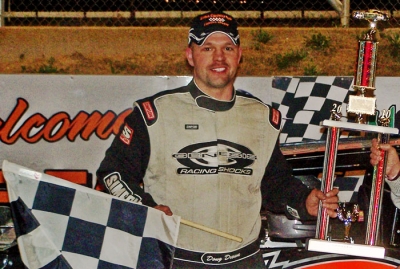 ATTICA, Ohio (April 17) — Outside front-row Doug Drown of Wooster, Ohio, outdueled polesitter and reigning track champion Ryan Missler of Bellevue, Ohio, and raced to victory at Attica Raceway Park for his first career victory on the Sunoco American Late Model Series. The 27-year-old Drown earned $2,000 in the series opener on a cool and chilly night in northern Ohio. | Slideshow

Two-time ALMS champion Rusty Schlenk of Jackson, Mich., who started sixth, moved up to finish second ahead of fellow Michigan driver Jeep Van Wormer of Pinconning, who started outside the fifth row. Missler was fourth while Steve Casebolt of Richmond, Ind., rounded out the top five at the third-mile oval.

For the first 26 laps of the 30-lap feature, Drown and Missler swapped the lead with Schlenk and Van Wormer getting into the mix in lapped traffic. Drown stayed in command late in the race for his third victory overall at Attica.

“I learned from Ryan in lapped traffic," Drown said of his battle with his fellow front-row starter. "He was the first one there and he dove down low and I thought 'I’ve got him.' I learned a lesson there by his mistake — it wasn’t really a mistake — when you’re leading you have to do what you have to do. They were just as fast as us so you have to stay in line as long as possible."

A few bad starts stymied the opening laps while Missler finally got rolling with Drown, Ryan Markham, Jeremy Canada and Schlenk in tow in a race that went without a caution the rest of the way.

Missler used the high side as he raced into slower traffic after nine laps while Casebolt and Van Wormer worked toward the top five.

Drown stayed within striking distance toward the middle of the race, and when Missler tried to go low under slower cars on the 15th lap, Drown made an outside pass to take the lead. Drown still had plenty of company up front the rest of the way, but Missler slide high in turn two on the 26th lap to slip back.