Burgtorf tops Frankel at Quincy for two in a row 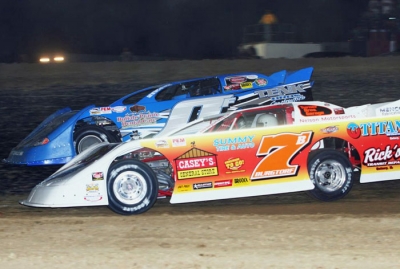 QUINCY, Ill. (April 11) — A different driver challenged at a different track, but the name at the top of the results for the second Deery Brothers Summer Series event of the season is the same as at the first.

Mark Burgtorf won his second IMCA touring feature in as many nights, topping Sunday’s show at Quincy Raceway. He’s now an eight-time series winner at his hometown track and raked in $2,000 for his 24th career Deery victory. Jason Frankel, another Quincy hotshoe, led for nearly a third of the 50-lapper before finally giving way to Burgtorf and settled for second. | Video

Polesitter Darrel DeFrance ran in front of the pack for the first 12 circuits before Frankel used the higher line to take the lead away. Burgtorf slipped past DeFrance on lap 18, shortly before Frankel began encountering backrunners.

Cautions at midway bunched the field. Burgtorf maintained his pressure on the leader, passing Frankel coming out of turn four on lap 34 and then checking out. Two lapped cars and most of a straightaway separated Burgtorf and Frankel at the finish.

Notes: Burgtorf's Nelson Motorsports team fields a Pierce Race Car with sponsorship from Casey's General Stores, Outdoor Power and Gem City Ford. ... Tom Goble earned the hard charger provisional and moved up 10 positions to 12th. ... The $250 Sunoco bonus went to Josh Most. ... A Quincy series record 50 Late Models were in the pits, two more than the previous mark set in April 2007. ... An Iowa tripleheader is next on the schedule, with races April 16 at Davenport Speedway and April 17 at Jackson County Speedway in Maquoketa before the first-ever series race at Dubuque Fairgrounds Speedway on April 18.