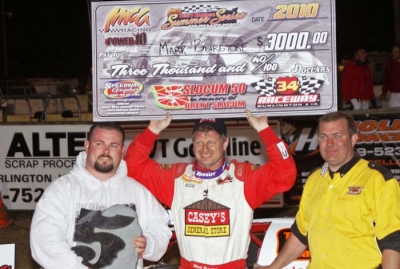 WEST BURLINGTON, Iowa (April 10) — Mark Burgtorf of Quincy, Ill., has made a habit of winning Deery Brothers Summer Series features at 34 Raceway. His Saturday victory was another one for the IMCA Late Model tour record books.

Burgtorf finally got the edge over Nate Beuseling of Silvis, Ill., following a lengthy side-by-side battle, to take opening night honors on the 24-year-old series. Burgtorf, a three-time tour champion, earned $3,000 for the victory in the second annual Slocum 50, his seventh series triumph at 34 Raceway and overall 23rd career series victory. He’s now the only driver in series history to have won seven times at two different tracks, owning the same number of trophies from his hometown Quincy Raceway. | Nate Beuseling sidebar | Video | Slideshow

Beuseling’s runner-up finish was the best of his brief Deery career. He’d run sixth last summer at Knoxville. Rob Toland of Davenport, Iowa, passed the most cars in his heat and consolation to get the hard charger provisional, then passed 19 more cars to finish third. Burlington drivers Tom Goble and Matt Strassheim rounded out the top five.

Ryan Giles took the initial green from outside the front row and led the first three laps before the fourth-starting Beuseling drove by. The ninth-starting Burgtorf worked his way up to second and chased Beuseling into lapped traffic. He was on the leader’s back bumper when the only caution of the 50-lapper came out right at midway, then took the lead briefly on the 32nd circuit.

Beuseling was back in front when the next lap was scored. The front pair went back and forth, Burgtorf on the inside and faster in the first set of turns, Beuseling higher up and faster coming out of the second set. Burgtorf was finally able to make what proved to be the winning pass on lap 40, crossing the stripe two lengths in front of Beuseling.

Notes: Burgtorf's Nelson Motorsports team fields a Pierce Race Car with sponsorship from Casey's General Stores, Outdoor Power and Gem City Ford. ... The event is among the most lucrative on the circuit and paid at least $500 to each feature start. ... The race is held in memory of track champion and series regular Brent Slocum; a portion of the proceeds from ticket sales went to the scholarship fund in his name benefiting area high school students. ... Reigning series champion Jeff Aikey won a consolation race and ended up 18th in the main event. ... Last year's winner Jason Frankel started with a provisional and finished 12th. ... Todd Malmstrom took home the $250 Sunoco bonus. ... The series moves to Quincy (Ill.) Raceway on Sunday for the second event of the season.