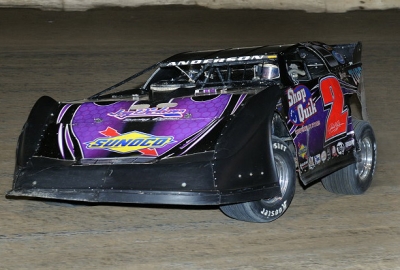 GREENWOOD, Neb. (April 3) — John Anderson of Omaha, Neb., opened the Lucas Oil Midwest LateModel Racing Association season at I-80 Speedway with the 20th victory of his career. Anderson led every lap to earn $3,000 at the 4/10-mile oval between Omaha and Lincoln.

Anderson started outside the front row and faced heavy pressure from reigning MLRA champion Al Purkey of Coffeyville, Kan., early in the race, and the frontrunners banged together exiting turn four on the fourth lap as Anderson maintained control. Anderson eventually pulled away and took the checkered flag a half-straightaway ahead of Purkey.

"A lot of these guys have new cars," Anderson said in victory lane after the season opener. "We got the ol' trusty one out, and it worked for us."

Purkey finished second in a new Hatfield-powered Larry Shaw Race Car while Terry Phillips of Springfield, Mo., was third in the Spring Meltdown, I-80's season opener. Brad Looney of Republic, Mo., was fourth and Dave Eckrich of Oxford, Iowa, rounded out the top five on a night when 50 Late Models packed the pits. Polesitter Jason Bodenhamer of Centerview, Mo., ended up fifth.