Turner turns fate around with victory at Clarksville 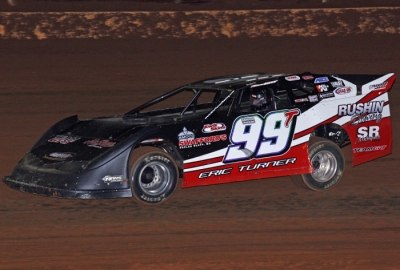 CLARKSVILLE, Tenn. (March 12) — In victory lane Friday night at Clarksville Speedway, Eric Turner of Springfield, Mo., said he hopes to be sitting on the unique porcelain trophy on Saturday at the MARS DIRTcar Series-sanctioned Tuckassee Toilet Bowl Classic. But after struggling the last half of 2009, the 32-year-old Turner was happy enough to collect $3,000 for leading all 30 laps in his first start of the season in his Steve Rushin-owned No. 99T. | Notebook | Slideshow

The polesitting Turner fought off occasional challenges from outside front-row starter Gary Christian of Broken Bow, Okla., then survived a last-ditch run from sixth-starting Brian Shirley of Chatham, Ill., for his fourth career MARS victory in the weekend opener at the quarter-mile oval.

Turner, who led the series points virtually all season before losing the title to five-time champion Terry Phillips of Springfield, won three of the first 11 series races in '09, but went winless the last nine races of the campaign.

At Clarksville, his No. 99T was working in the high and low grooves as he made sure to keep Christian and any other challengers from sweeping around him on the outside on a racing surface soaked by afternoon rains.

"I just tried not to overdrive it and keep my tires hooked up," Turner said. "I really wanted to get out in front of (Christian) so I could get up on the racetrack (in turns one and two) because he ran the top there that first few laps, and I could hear him down there. I figured I'd better get up there or we were going to go backwards."

Christian, 16, pulled alongside Turner with a low-side move exiting turn four on the 11th lap, but couldn't complete the pass in running second most of the way.

"That top side, he had more momentum (exiting turn four)," said Christian, who plans to run for MARS Rookie of the Year honors in '09. "I think if I could've ever followed him right on his tail, I could've got him in turns three and four, but he was just pulling off on those starts a little more than I was."

Shirley used the high groove virtually all race long, running in the top five virtually all the way but never getting up into second place until the final laps with an outside move on Christian exiting turn two.

"It seemed like where I felt best up there," said Shirley, who turns 29 on April 2. "If we just would've had a long run, we had a car capable of winning the race. It just seemed like there was one too many cautions for me to make something to happen."

Shirley caught Turner in the waning laps, but with Turner running higher in turns three and four, he decided to try a low-side move on the final lap that fell flat, leaving him briefly dead in the water and allowing Christian to regain the second spot.

"I tried to see if I could banzai it in there (in turn three) on that last lap, and I ended up getting in that slime and slid up high. I ran third, but hell, we didn't come to run second, did we? That's just kind of how it is," he said. "I thought I could get in there and at least angle it and have a shot to drag there on the bottom, but when I went in there, shoot, it just shoved off."

Charles Zimmerman, who started 11th, picked up three spots in the final eight laps to finish fourth after jumping to the high side and fellow Cunningham, Tenn., driver Steven Ashby, the night's fast qualifier, was fifth.

Five-time and reigning MARS champion Terry Phillips of Springfield, Mo., ran third the first half of the race, but he tangled with Duane Chamberlain of Richmond, Ind., entering turn one on the 20th lap, and the resulting damage knocked him from contention. Chamberlain faded late to finish sixth.

Just over half the 24 starters were running at the finish of a race slowed by six cautions, none for serious incidents. Sam Epling's turn-four spin forced a complete restart on the first lap, Rylan Long spun inside turn two on the fifth lap and Jeremy Payne stopped with damage on the 10th lap.

Tony Morris slowed to draw a lap-17 caution, a slowing Phillips collected Jason McBride on the backstretch on the 20th lap, and fifth-running Steve Casebolt lost fuel pressure for the final yellow on lap 22.

Notes: Turner's Steve Rushin-owned GRT Race Car is sponsored by Swafford's Amoco and Rushin Towing. ... Turner made a few January starts at the unsanctioned Wild West Shootout in Tucson, Ariz., in a Jeff Sires-owned car, but never was in contention ... MARS typically using passing points through heat races to set feature lineups, but the series is using time trials at Clarksville. ... Former UMP champions Dennis Erb Jr. and Kevin Weaver both nearly spun in turn one in time trials and were more than four second off quick time. Erb was able to make the main event with a last-lap pass of Rylan Long in the second consolation race. ... Gravel has been spread throughout much of the pits that was formerly grass, making things less muddy in the pits than they would've been on a night of racing following afternoon rains. ... Jeremy Payne's regular No. 74 wasn't ready, so he used a loaner from GRT Race Cars, a car formerly piloted by Louisiana driver James Ward. ... Steven Ashby of Cunningham, Tenn., set fast time despite using a steel powerplant, his backup engine while his primary aluminum-block engine gets freshened. ... Three of the six divisions had seven or fewer entries.