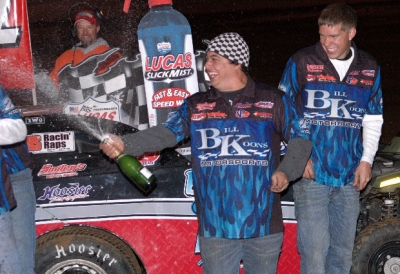 NEVADA, Mo. (Oct. 18) — John Anderson of Omaha, Neb., raced to victory Sunday at Nevada Speedway, but the triumph wasn't enough to take the points lead from Al Purkey of Coffeyville, Kan., in the season finale on the O'Reilly Midwest LateModel Racing Association. | Slideshow

Purkey, who needed to finish within five positions of Anderson to claim the crown, wrapped up his unprecedented sixth series championship with a runner-up finish. David Turner of Creighton, Mo., was third followed by Chris Smyser of Lancaster, Mo., and hometown driver Brantlee Gotschall, who rallied to fifth after winning a consolation race.

Purkey started on the pole position with Joe Kosiski of Omaha, Neb., on the outside, but Kosiski fell out of the second spot when he got out of shape on the eighth lap. Anderson moved up to second for the restart and was glued to Purkey's rear deck.

Anderson overtook Purkey on the 16th lap to take command while Purkey stayed in his shadows. Several late-race cautions slowed the action, but Anderson and Purkey both held their positions to give Anderson the $3,000 victory and to give Purkey his championship.

Notes: Anderson's MasterSbilt Race Car has a Jay Dickens Racing Engine and sponsorship from Shop Quik Convenience Stores, Turbo Car Wash and MarCorp Electric. ... Purkey's sixth title breaks a his tie with Alan Vaughn, who has five championships. ... Fourth-place finisher Chris Smyser piloted Reid Millard's car because his regular No. 25 was damaged in an accident two weeks earlier in Knoxville, Iowa. ... Bill Koons finished second in his heat but was light at the scales. ... The 30-lap feature was delayed a day by inclement weather. ... The MLRA banquet is scheduled for Nov. 21 at Argosy Casino in Riverside, Mo.