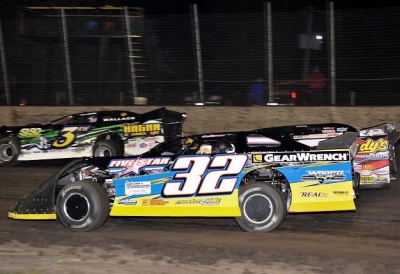 Phillips, who won Friday's preliminary feature, settled for second while fellow Springfield, Mo., driver Payne was placed last in the 24-car field after crossing the line third but weighing in too light. That moved Brandon McCormick of Lebanon, Mo., up a spot with Eric Turner of Springfield and series points leader Al Purkey of Coffeyville, Kan., rounding out the top five. John Anderson of Omaha, Neb., lost more ground to Purkey in the points chase with a ninth-place finish after an early flat tire.

Phillips moved past Payne after a lap-11 restart as McDowell picked up speed, taking second on the 14th lap. But McDowell soon was forced to pit to change a flat tire, leaving Phillips, McCormick and Payne in the top three spots.

But Simpson stayed with the frontrunners and took the lead on lap 27, beginning a lead-swapping duel with Payne with Phillips right in the mix. Simpson took control for good on the 35th lap and went on to victory.