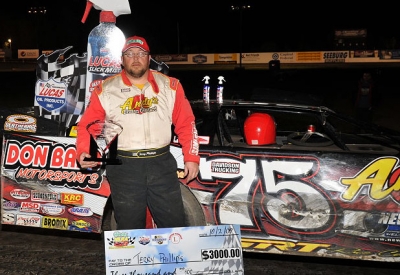 Phillips started on the front row alongside the polesitting Payne, who took command on the second lap after Phillips led the first circuit. Payne, an Arizona transplant who races out of Springfield, Mo., stayed in control most of the race, including a 20-lap green-flag stretch of racing halted with three laps remaining in the 30-lapper.

On the lap-27 restart, apparent contact between Payne and the second-running Phillips sent Payne into a backstretch spin, and he pulled his No. 74 to the pits. Phillips inherited the lead for the restart in his No. 75 and fought off Miller, of Waterville, Ohio, for the $3,000 victory, his MLRA-leading 96th of his career.

Kyle Berck of Marquette, Neb., finished third followed by Dale McDowell of Rossville, Ga., who rallied from his 18th starting spot after winning a consolation race. Matt Lux of Franklin, Pa., rounded out the top five in his first-ever appearance at Lakeside.

The top contenders in the MLRA points chase both ran into problems. Al Purkey of Coffeyville, Kan., took the points lead from John Anderson of Omaha, Neb., with a 10th-place finish, but not before making an early pit stop. Anderson had mechanical problems after getting into the turn-two wall and dropped out with a 22nd-place finish. Purkey leads Anderson by four points with two series events remaining.

Notes: Phillips drives a Hatfield-powered GRT Race Cars sponsored by Andy's Frozen Custard, Don Babb Motorsports, Davidson Trucking, New Vision Graphics and Integra Shocks and Springs. ... Phillips has always been strong in the late-season doubleheader at Kansas City and swept both races in 2006. ... The event is in conjunction with the weekend's NASCAR action at nearby Kansas Speedway. NASCAR driver Clint Bowyer, a former modified champion at Lakeside, entered the MLRA event but failed to make the feature, but the Bowyer-owned Dale McDowell entry ran fourth. ... Friday's first caution in the main event appeared for debris on the fifth lap. ... A lap-seven yellow came out for a backstretch spin by Kurt Kile and Chris Simpson. ... MLRA Rookie of the Race Matt Johnson ran in the top five early but ended up 11th. ... Among drivers failing to make the feature: Delbert Smith, Al Humphrey, Jimmy Segraves, Bill Koons, Andrew McKay, Shad Badder, John Kuchar, Steve Kempt and Clint Bowyer. ... The Clyde Ellis Showdown continues Saturday with a $5,000-to-win event.