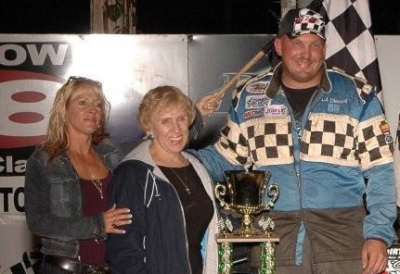 Diemel, fresh off a victory in the WISSOTA 100, earned $4,000 for the 40-lap victory while Anvelink settled for second at the third-mile clay oval. Outside front-row starter Ashley Anderson of nearby Elk Mound, Wis., was third followed by Marshall Fegers of Mound, Minn., and Brent Larson of Lake Elmo, Minn., in the season-ender at Red Cedar, condensed into a single-day show on Saturday by Friday rain.

The polesitting Anvelink was out front early but Diemel quickly moved into the runner-up slot from his second-row starting spot. With most drivers in the low groove, Diemel moved up a lane and powered past Anvelink exiting turn two to take control.

The race's lone caution appeared on the seventh lap when debris came off Terry Anvelink's car, and Diemel went right back to work, opening nearly a straightaway advantage while the battle for second raged.

Contact between Nick Anvelink and Anderson allowed Anderson to squirk past while Fegers and Larson battled just behind them.

Diemel initially moved through lapped traffic easily, but some cars were able to unlap themselves when he stayed higher on the track, so he fell in line on the low side while Anvelink regained the second spot from Anderson after more contact.