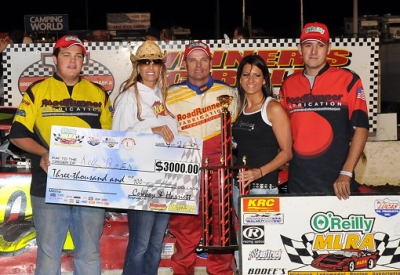 GREENWOOD, Neb. (Sept. 26) — Taking the lead with two laps remaining, Kelly Boen captured the Cornhusker Classic at I-80 for a co-sanctioned victory worth $3,000. The 12th-starting Boen overtook Kyle Berck of Marquette, Neb., to earn his record-setting 11th O'Reilly National Championship Racing Association victory of the season and his fifth victory on the O'Reilly Midwest LateModel Racing Association. | Slideshow

Reigning O'Reilly MLRA leader John Anderson of Omaha, Neb., entered the event with a 58-point lead over Purkey, but that margin shrunk when engine problems forced Anderson out of the feature on the with a 22nd-place finish.

Among cautions was an early wreck exiting turn one that involved several cars and sent Ron Tex's car into a flip. Corey Zeitner's car was also heavily damaged in the accident, but no one was seriously injured.