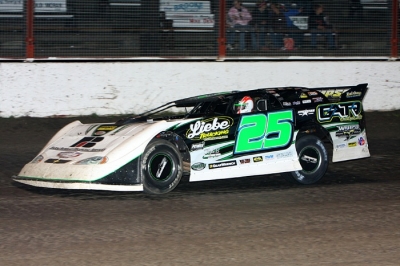 Simpson, who took command on the 22nd lap, saw a variety of racers chase him before the 10th-starting Hurst reached the second spot on lap 78. Hurst once pulled even with the leader exiting turn two, but Simpson was able to edge back ahead and stay in command as they worked through slower cars.

“I don’t mind traffic when it stays single file, but when it starts to fill the track in front of you, I get worried,” said the 30-year-old Simpson, who earned $10,000 for winning the previous Saturday's Yankee Dirt Track Classic at Farley Speedway. “I just had to try and keep the door closed as much as I could.”

“I was just trying to keep my momentum up,” Hurst said. “I did it one time and I got up by him (Simpson), and then he got back around me."

The 100-lapper began on a freshly reworked racing surface with polesitter Chris Simpson, the winner's younger brother, taking the early lead. The younger Simpson held the point six laps until Andy Eckrich took over. The youngest of the Eckrich brothers led the field into traffic on the ninth lap while the sixth-starting Miller moved into second two laps later.

A lap-15 caution bunched the field with Andy Eckrich leading Miller and Chad Simpson back to green. Simpson overtook Miller on the restart and took a lead he'd never give up on lap 22.

“For some reason on the restarts, I was good on the high side," Simpson said. "Darren was tough, but he was tough all weekend. On that restart I was able to get around him up top and stay in second."

Once in the lead, most of the action took place behind Simpson as Miller, Eckrich and a surging Hurst swapped the second spot through the race's middle stages. Hurst, who started in the fifth row, eventually took the second spot for good with 22 laps remaining as he turned up the heat on Simpson.

“This car, once it burns off some fuel, it gets better,” Hurst said. “You get some laps in and lighten the fuel load, the car really comes to life.”

Not enough, though, to catch Simpson, who increased his eight-day earnings to $17,000 with the victory.

Notes: Simpson's MasterSbilt Race Car is sponsored by Liebe Trucking, GATR Volvo-GMC, Five Star Shop Service and Simpson Farms. ... With passing limited through the features before the Late Model event, promoter Keith Simmons and his staff reworked the track surface. “I knew what they were doing had to help,” Chad Simpson said. “The track had rubbered up by the time the modified feature was over, and you could tell there wasn’t going to be much there for us. You have to take your hat off to Keith and his staff for the work they did. It made the track really racy early on and let us go out there and race. By the end it had rubbered up, but what track doesn’t when you run a 100-lap race?” ... Four cautions slowed the 100-lap feature. ... Thirteen of 24 starters were running at the checkered flag for the track's season-ending event.