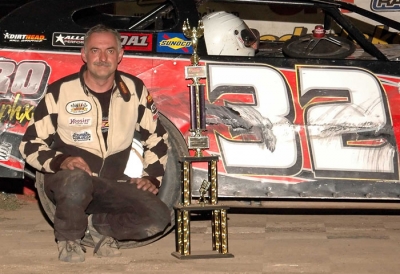 Anvelink earned $5,000 for his first career victory at the western Wisconsin oval while Redetzke, winner of one of the semifeatures at the four-day event, settled for second in the 40-lapper. Nick Anvelink, the winner's son, was third with Ashley Anderson of Eau Claire and Cory Mahder of Elk Mound, Wis., rounding out the top five. NASCAR track champion Rick Egersdorf of St. Paul, Minn., finished 10th. | Video

With a long stretch of green-flag racing, the Anvelinks held the top two spots at the halfway mark, but Redetzke took second from the younger Anvelink on lap 21. Adam Hensel slowed two laps later, bunching the field for a restart.

On the restart, Don Copp spun in turn two and was pushed to the infield for the final caution as the final 17 laps went straight through. The elder Anvelink edged away from Redetzke as Larson faded, eventually dropping out of the top five.

In the final laps, Redetzke was able to close Terry Anvelink's leading margin and was right on the leader at the white flag. Redetzke made a hard charge exiting turn four on the final lap, but Anvelink held on for the victory.