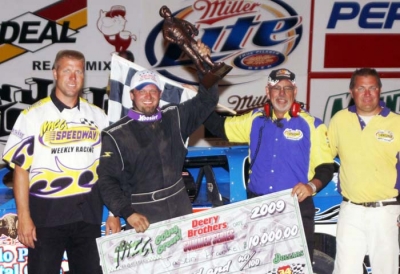 The 100-lap series finale saw three lead changes, constant shuffling in and out of the top five, and just two cautions as the race stayed green the last 47 laps. Burgtorf led most of the distance but settled for second ahead of consolation race winner Rob Toland, Aikey and Terry Neal. Defending race winner Matt Strassheim was sixth.

Burgtorf started outside the front row and was chased by Lonnie Bailey and Frankel into lapped traffic on the 13th circuit. Fred Remley brought out the first caution when he got too high on the track and caught the turn four wall on lap 16.

He’d stay there until lap 47, when Burgtorf motored by. Aikey made a pass of his own for the front, which was negated when the third running Neal and fourth running Bailey got together to bring out the second and final caution on lap 53.

After slipping back as far as sixth, Frankel started working his way back up, catching Fraise and then Neal to get back into contention for the big payday. Aikey fell on lap 97 and Burgtorf, who’d held Bailey at bay when the pair finished 1-2 at the 2007 Pepsi, gave way on lap 98.

The victory was the series career third for Frankel, who moved past Ray Guss Jr. into second in series point standings with the win. Aikey clinched his career sixth Deery title at the Sept. 7 show during the IMCA Speedway Motors Super Nationals.

Notes: Frankel also won Friday’s 20-lap Ironman feature for the 10 drivers with perfect attendance through the first 19 events of the series. That win was good for $840, after each driver received an extra $90 from J&J Steel. .... Winners of drawings for sets of Brodix cylinder heads were Guss among the feature qualifiers and Robby Warner among the non-qualifiers. ... The event's 64 entries was the seventh-highest single event total on the 23-year-old series. The all-time record is 71 set at the same race. ... The total car count for this season’s 20 races was 759, second only to the 849 in 1998. An average of nearly 38 cars entered each event.