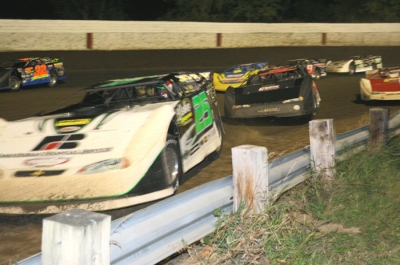 Simpson robbed the 32nd Yankee of drama with a commanding, victorious performance that had rivals tipping their caps his way. “He was never in any danger of going down,” Farley Speedway promoter Keith Simmons said. “He had the best car all week.”

Simpson claimed the lead on lap 21 when leader Jason Rauen retired with engine trouble and cruised controlled his way to his second Yankee victory and a $10,000 payday at Farley. Simpson’s 1.7-second win over four-time Yankee champion Denny Eckrich wasn’t a carefree Sunday afternoon drive. Simpson protected the lead through 11 caution stops. His motor didn’t lose an ounce of horsepower during the interruptions.

Knowing the track’s high side would be off limits for passing once the racing surface rubbered up midway through the feature, Simpson settled into a smooth mid-groove and never sweated.

“I knew if I kept it straight Id be in pretty good shape,” Simpson said. “When it rubbers up, it’s very tough to pass.”

Simpson was challenged just once, on lap 77, when Andy Eckrich attempted to get into pickoff position on the low side. Simpson spent the entire night outrunning the Eckrich family. At one point of the race, brothers Dave, Denny and Andy were running 2-3-4 in pursuit of Simpson.

“I’d seen them on the leader board and was getting a little nervous,” Simpson said. “Andy’s been very good on this track this season. He knows how to (win here). I knew I was going to be challenged.”

But Andy Eckrich didn’t have the momentum to pull off the pass on the backstretch.

“I knew I had to sneak attack him,” Eckrich said. “I had a good move but I couldn’t finish it on the backstretch. He’s a tough competitor. He knows how to get around here.”

Simpson was able to find his previous speed after every restart. He built two-second leads within two laps off restarts on laps 80 and 91. But Simpson wasn’t penning his victory speech before he reached the finished line, especially when felt his brakes start to give with 10 laps left.

“I was hoping they’d hold,” Simpson said. “They were getting spongy. ... I was more worried about this thing breaking than I was about getting beat.”

The only real race drama was who would emerge as Simpson’s closest shadow. Denny Eckrich overtook his younger brother Andy on lap 94 for second. Andy finished a solid third with Steve Ihm and Jeff Larson rounding out the top five.

Simpson’s easy victory was a far cry from his tension-soaked, stunning 2005 victory. That year, Simpson advanced from the consolation features and a 25th starting spot to become one of the most improbable Yankee winners in history.

This year, Simpson left no doubt. The 2009 campaign has been a dream season for Simpson, who is aiming to wrap up his second straight World Dirt Racing League championship.

A win as dominating as Simpson’s, Simmons said, “shows you’ve got your car right.”